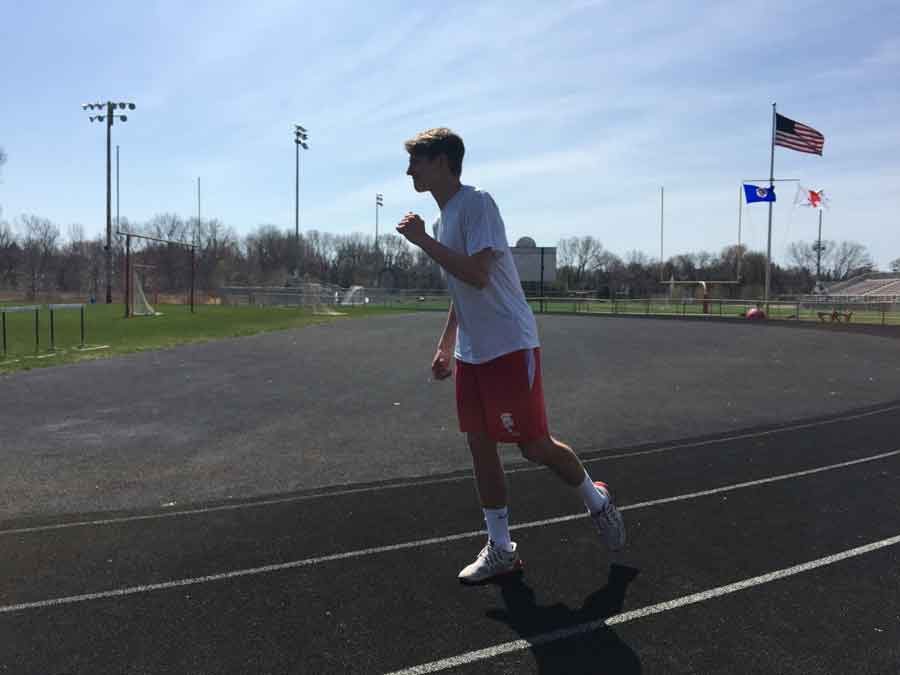 Senior track captain and lacrosse player Bill Lichliter excels in both sports while still keeping up with his academics.

With the added stress of having success and the time and energy needed to be put in for sports, many high school athletes reduce the number of sports they play in order to balance competitive sports and getting good grades.  However, senior Bill Lichliter has taken on the challenge of school and sports by playing not only one sport, but two sports.

Lichliter started lacrosse in eighth grade, but when his junior year came around, he felt the need for change.  “I had the idea of doing track after I was put on B-Squad for lacrosse, known as prep-team, now, both my freshman and sophomore year. Jalen Floyd pushed the idea of doing track on me during the football season and talked about how I could be part of the 4×100 meter relay with him, Austin Robertson and Matt Cornell,” Lichliter said.

Once his senior year started, Lichliter felt the need to pick up lacrosse one last time. “I picked lacrosse back up this year, because I didn’t want to question what could have been. I knew this was a fun group of guys, who will do great things, and I wanted to be a part of it. Also when I heard Coach Horn, who was the head coach when Benilde won two back-to-back state championships for lacrosse, was coming back to be the new head lacrosse coach it did not take me long to decide that I wanted to be a part of the greatness he was going to coach us up to be this year,” Lichliter said.

One of the most common questions that Lichliter gets asked is: How does he juggle playing two sports while still doing school work? “Track & Field is right after school, about 3-5 [p.m.]. Lacrosse is generally after, but when the times conflict, Coach Horn understands and knows where I am and that I will be showing up a couple minutes late.  Both Coach Horn and Coach Ola are very cool about letting me compete in both sports,” Lichliter said.

The most difficult part, however, can be when the times do overlap and he has to decide.  At the beginning of the season, he decided to prioritize track over lacrosse.  “Track holds priority over lacrosse in the aspect of me being a leader.  I feel being a captain of the track team, I have to be at everything for track and it has to come first.  As soon as other kids see that I am skipping track practice, they might think it’s alright for them to skip also, and as a track captain that is not what I want,” Lichliter said.

Many people would think that playing two sports would mean that his school performance would suffer, but he doesn’t see it that way. In fact, he almost thinks it helps him. “I don’t think it makes my school performance worse, not yet anyway. I think it really trains and works on my time management skills, whenever there is available time I am doing homework, eighth hour or the time I have between my two practices. Like I said doing two sports takes up a lot of time, about four to four and half hours of my after school time. I get home anywhere from 7:30 to 9 varying on lacrosse practice or if we have a game. As soon as I get home, its homework. There is no time for me to be slacking, as soon as I start slacking, I’m already behind,” Lichliter said.

As of right now, Lichliter is unsure of whether or not he wants to take his talents to a Division-III school or not. “For right now I think it would be very hard to get scouted for either track or lacrosse. Since this is my senior year and the season goes on after the college decision deadline it would be difficult to get any offers or even letters of interests in such a short period of time. As of now I have not made up my mind yet, if I want to take on the challenge of being a student athlete on a D-III level,” Lichliter said.

There are many athletes that compete in multiple sports, but Lichliter is a rare breed: competing in two sports in the same season, while still being a successful student.