For most BSM seniors, going to college after graduation is a given; but for seniors Zach Risteau, Auggie Moore and Cade Gleekel, athletics will take center stage as they prepare to play Junior Hockey next year, with aspirations to ultimately play Division I college hockey. While Risteau and Gleekel plan to stay in the US to play, Moore plans to head over the border to British Columbia, Canada.

Spending a few years playing hockey in a Junior League is becoming more commonplace among D-I hopefuls as the world of collegiate hockey continues to get more and more competitive. Junior Hockey organizations operate out of both the US and Canada, and together have over 250 teams representing varying skill levels.  In the US, Junior Hockey is played on a tier system to which prospective players are drafted, meaning they can’t just pick a team to play for.

There are three tiers in the US, with Tier I being the most elite, and therefore the most competitive. “In the broad scope of Junior Hockey, there’s the USHL, which is the best league you can go play in before playing in college. Then in the US, there’s the NAHL, the North American Hockey League, that’s Tier II; the USHL’s Tier I. In Canada, they have what’s called ‘Junior A,’ which is where I’m going. You could put it pretty much on the same level [as the NAHL],” Moore said.

There are also Tier II and III leagues within the ranks of US junior hockey. The NAHL is the sole Tier II league in the country and holds 22 teams, while Tier III has ten leagues and over 90 teams. The United States Hockey League (USHL), however, is truly the best league for college hockey-hopefuls. On average, 95% of its players get D-I opportunities each year, and in 2014, the league saw 99% of its players commit to play NCAA Division-I hockey.

The USHL is the United States’ only Tier I league and holds 17 teams most of which are located throughout the Midwest. In 2015, they produced 37 players that were drafted by the NHL. Risteau has been drafted by the USHL’s Chicago Steel and plans to play for them next year. “You get drafted by one team, but like [the] NHL, you can get traded to other teams; you can trade players one for one and things like that,” Risteau said.

I was probably like every other kid—at first you hate the uncomfortable feeling of all the equipment, but my dad grew up playing hockey and he kind of forced it on me. He was like, ‘you’re going to like it,’ and I ended up liking it a lot.”

Getting drafted to “The Steel” made Risteau’s decision to commit to juniors easy, as many of the USHL’s teams are in places like South Dakota or Iowa. “You don’t know what team you are going to get drafted by, and you kind of have to decide ‘Is this a place I want to spend the next one to two years playing in?’ I lucked out being in Chicago. I think it will be an even better time off the ice, so I didn’t have to put a whole lot of thought into it,” Risteau said.

Moore’s decision to play took a little more time, coming after an opportunity to play arose. “It is hard to decide whether to go to school or to go play juniors. I had made my mind up this summer that I would take the juniors route, so when I got an offer from Alberni Valley, I talked to a few players who I know there, and they had nothing but good things to say. It was a pretty easy decision,” Moore said.

While Risteau and Moore get ready for their moves to Chicago and British Columbia respectfully, senior Cade Gleekel is also preparing for a move: to join the NAHL’s Aberdeen Wings in South Dakota. “As of right now I think I’m playing in Aberdeen, South Dakota, but the USHL draft is after the [high] school season ends. If I get drafted, then I’ll [go] play with them. I tendered with Aberdeen, which means I have a [guaranteed] spot there,” Gleekel said.

With the USHL draft looming, things aren’t quite set in stone yet; there’s still time for rosters and teams to get shuffled around. Even after being drafted to a team, players are still required to try and out make that particular team. “We [all] have to wait to see how the summer goes,” Gleekel said.

It’s going to be fun to get one year to completely focus all your energy on [hockey], where you don’t have to worry about school. ”

In Canada, it’s run a bit differently. The highest level of Junior Hockey in Canada is called “Major Junior;” which is considered to be a professional league (players sign professional contracts and are paid, making that player ineligible to play college hockey in the US). However, Moore is planning to play at the “Junior A“ level, Canada’s second-most elite league, a favorite for players who still hope to play US college hockey down the road. At the Junior A level, players aren’t required to sign professional contracts, remaining eligible to play college hockey in the US.

For these boys, their entrance into the junior leagues will mark nearly fifteen years of playing hockey. “I first started skating when I was three or four years old, and I was probably like every other kid—at first you hate the uncomfortable feeling of all the equipment, but my dad grew up playing hockey and he kind of forced it on me. He was like, ‘you’re going to like it,’ and I ended up liking it a lot,” Risteau said.

Just like Risteau, Moore has been playing for his entire life, not remembering a time when he didn’t. “Hockey has always been a part of my life, for as long as I can remember. My dad played; all my uncles played; my older brother played. I think I was on the ice as soon as I could walk,” Moore said.

Transitioning from high school hockey to junior hockey is a huge step, and naturally has the boys eager. “I’m excited to meet new teammates and meet kids from all around the country, and kind of start over a little,” Risteau said.

For Gleekel, junior hockey will give him an opportunity to truly focus in on his passion without distraction. “It’s going to be fun to get one year to completely focus all your energy on [hockey], where you don’t have to worry about school,” Gleekel said.

With excitement, however, comes nerves. No members of the junior hockey-bound trio have ever done anything like this before, so being nervous can be expected. “I wouldn’t say I’m really worried about it, but you’re always a little nervous about is the family you’re going to be staying with and the guys on the team. Some of those things stick in the back of your mind,” Moore said.

Hockey has always been a part of my life, for as long as I can remember… I think I was on the ice as soon as I could walk. ”

Risteau, Moore and Gleekel aren’t the only seniors planning to keep up with hockey in the future. Senior Jerry Calengor is still unsure about committing to junior hockey. “[I’ll] hopefully major in either history or political science. I want to go to law school after college; I don’t really feel like that’s something I should put on hold too long. I don’t feel like I can go anywhere in hockey after college, so I want to get my life started as soon as possible,” Calengor said.

Calengor knows he has options, and has spent quite a bit of time considering each of them. “I’ve just been weighing my options, really like pros and cons­. They’re pretty even. I don’t know what it would take to tip me one way or the other. I’ve had a couple [offers], Gustavus said I could go play there, St. Olaf [too], those would be two schools where I don’t think I’d have to go to juniors to attend, and I’d be able to play hockey there,” Calengor said.

On the contrary, senior Jared Gherardi is set on going to college next year, only entertaining the thought of playing juniors. “In college I want to major in Finance and Math, then go somewhere in the financial field for a job. Everyone’s going to have to stop playing at some point, so why not just stop at high school, take on my career, and get educated,” Gherardi said.

However, Gherardi, isn’t planning to quit the sport cold turkey, and hopes to continue playing here and there in college. “[I’d] definitely play intramurally. I don’t think I’d do club. I wouldn’t want to be that dedicated, but for sure an intramural team. I definitely still want to be throwing on the skates for fun,” Gherardi said.

Going to school at some point is important in all of the boys’ minds. “I’ve been talking to a few schools, and when it comes down to it, I wouldn’t go to a school just to play hockey. I’d rather enjoy the school that I go to,” Moore said.

Though the boys still have a lot to do before heading off to join their teams, this much they know for sure: they’ll be keeping up with a passion instilled within them since before they can remember. “Honestly, I don’t remember the process of learning how to skate, it’s almost like reading, and I don’t really remember specifically learning how to read. It’s just one of those things I’ve always known how to do,” Moore said. 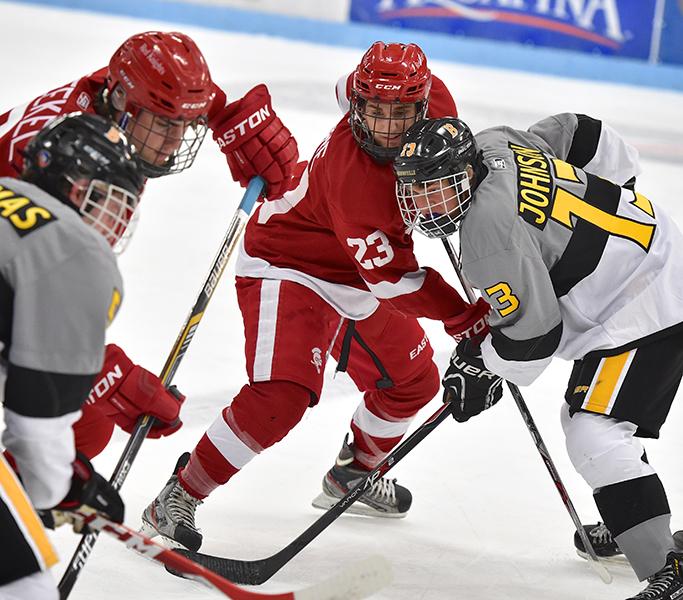 Gallery|7 Photos
Photo Courtesy of Steve Bernstein
Moore goes facemask to facemask with an opponent during a battle for the puck.
View Comments (1) 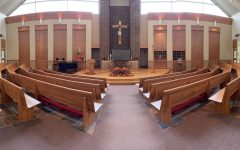 Students and administration looks to strengthen relationship after a rocky start 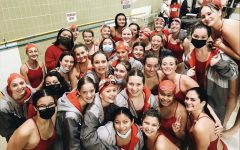 Girls’ Swim and Dive is back in the pool for another challenging, yet lively season 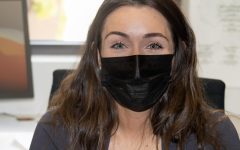 BSM brings on a new assistant to the president this year 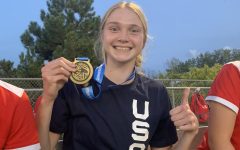 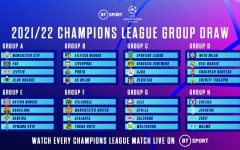 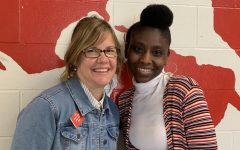 From Kids to Colleagues: An Oral History 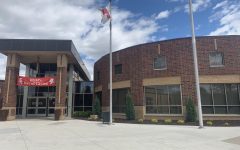 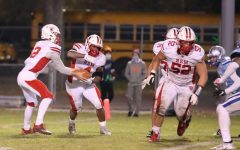 The evolution of Nick Marinaro

COVID takes its toll on the college expereince