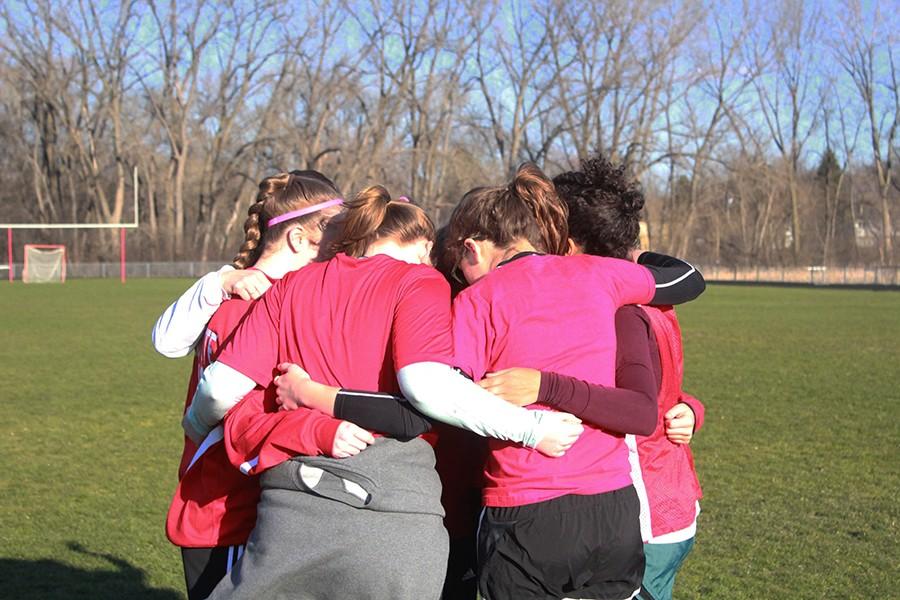 All of the members of the girls' ultimate team are new to the sport, but they are eager to practice and improve.

This year’s group of Ultimate Frisbee players has set themselves apart from past teams. The sport has grown tremendously in popularity at BSM ever since it was first introduced as a spring club in 2012. Since its inception, Ultimate Frisbee has been a coed activity; however, a group of senior girls changed that this year by establishing their own, all-girls team where they could have fun, be competitive, and try something new in an after-school activity.

All the girls that participated on the BSM Ultimate team in previous years have graduated, leaving the team all boys. The girls think the separation of teams is important to provide a comfortable environment where the girls can hang out and relax with their friends.

Forming the all-girl lineup was a big step up, and wasn’t easy. The senior girls took their idea to the sports department and gathered more recruits until the all-girls team was approved. Since the girls are new to the game, everyone is on the same level, which helps them to work together and encourage their teammates. “I think we are all on the same page with what we want out of the season, which is to all get better together and have fun with friends,” Sather said.

Besides not being co-ed, the only difference this year will be the player turnout. The number of girls signed up so far is slim compared to past years, but they continue to keep an open mind and know that it won’t be too big of an issue. Last year, the co-ed team consisted of 30 members, and this year, the all-boys team has about 18 members. “Right now, there are only 8 or 9 girls signed up, and there are seven people on the field at a time. That could be a little tricky, but we can definitely make it work,” Sather said.

All of the girls are excited to start the season. Most of them haven’t played an outdoor sport since junior high, and they know that being outside is the best way to spend springtime. Focusing on friendly competition will be an excellent aspect of the game and growing closer as a team. Especially as a senior, strengthening bonds between friends will be important towards the end of the school year. “I joined because it seemed like a fun activity for the last part of my senior year, and it is something I’ve never tried before,” senior Maddie Etienne said.