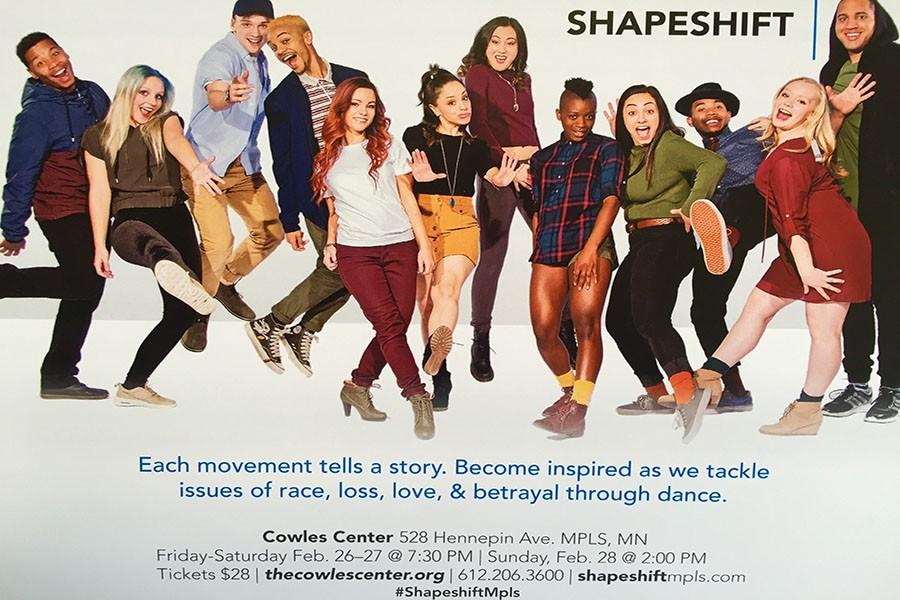 Keenan Schember, pictured third from the left, with the Grey Skies Blue cast.

Keenan Schember, a BSM senior and seasoned dancer, has an upcoming performance at the Cowles Center in the Goodale Theater with the hip-hop/contemporary storytelling dance company SHAPESHIFT. The show, Grey Skies Blue, follows a summer friendship woven with undertones of love, race, family, and betrayal. SHAPESHIFT places an emphasis on conveying human emotion, with the goal of leaving the viewer entranced by the dancers’ movements, and inspired by their message.

SHAPESHIFT is a non-profit company dedicated to spreading the the  importance of arts to a wider demographic, “We have a show Friday during the school day for kids in the Minneapolis area to promote arts for the schools” Schember said.

This upcoming show will be SHAPESHIFT’s second at the Cowles Center, but Schember’s first. “I joined SHAPESHIFT back in October after the director contacted me and asked me to join the company for the upcoming season. I had worked with Ashley before and seen their previous show, so I knew it would be a good fit,” Schember said. The shows are collectively produced by the entire cast, but the company is spearheaded by Ashley Selmer.

When asked to describe the show, Schember touched on the powerful choreography and the feelings it’s able to evoke in the views. If you’re a fan of musical theater or traditional Broadway shows, this show won’t disappoint, “It’s like a musical without out the singing and talking; it’s just dance” Schember said.

SHAPESHIFT is no stranger to the spotlight having performed at the Excel Energy Center to a crowd of over 20,000, and, among other things, have been featured on The Fox Morning

News Show. SHAPESHIFT comprises of fifteen incredibly talented and close-knit dancers, “We’ve been rehearsing since October, so this show has been a lot in the making. We’re really looking forward to sharing our hard work with the community” Schember said.