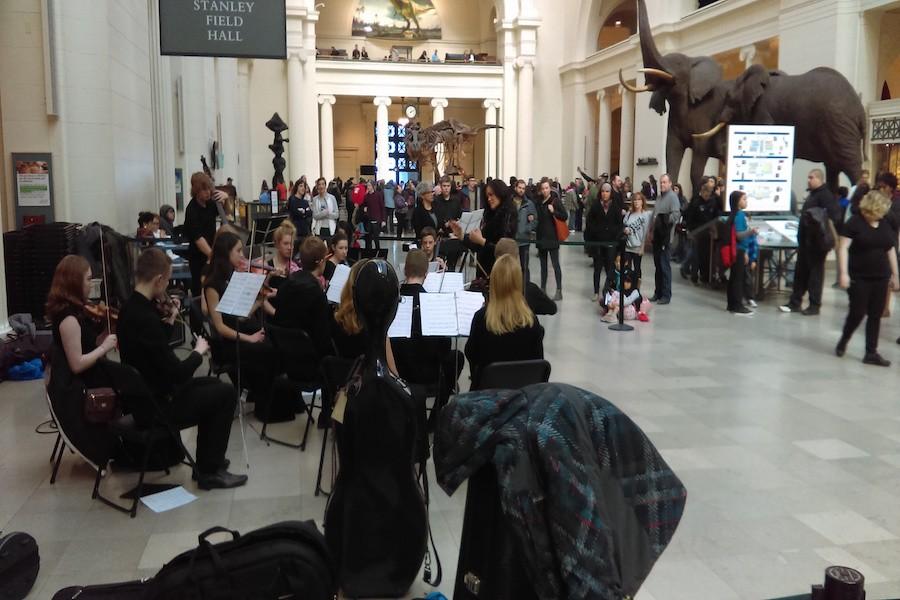 The BSM choir, band, and orchestra performed at an elementary school in Wisconsin and the Field Museum in Chicago.

The music department went on a trip to Chicago to perform and sightsee. Over President’s Day Weekend, the music department, which includes band, orchestra, and choir, performed two times: first, at an elementary school in Menomonie, Wisconsin and then at the Field Museum in Chicago. In Chicago, the students did a variety of activities, such as going to Shedd Aquarium or seeing Beautiful: The Carole King Musical. Overall, the trip provided an experience that the students won’t forget.

On the way to Chicago, the group first stopped in Menomonie, Wisconsin, to perform at an elementary school. “The first thing we did on the trip was the performance at the school. It went well, and the kids were really cute,” junior Macy Rooney said.

Once they arrived in Chicago, the students went to the Medieval Times Dinner Show. “The show had men jousting on horses and the actors did a good job of acting like they were from medieval times. We also had food brought to us, and we got to eat it with our hands, so that was a nice touch,” Rooney said.

The next day, the students went to the Field Museum, where they were able to perform and look around the museum. “We got to go around the museum for a little while and see some of the exhibits, which had some cool artifacts. Then, we performed, which was in in the area outside of all the exhibits,” senior Kelly Johnson said.

After that, everyone went to the Shedd Aquarium, which had aquatic animals such as dolphins and seals. “The aquarium was cool. It was fun to look at everything,” Johnson said.

Perhaps the most exciting thing the students got to see was Beautiful: The Carole King Musical, which is based off the real life story of Carole King. “The musical was so good. The music was absolutely amazing, and everyone was outstanding. It was probably the highlight of the trip for me,” Rooney said.

On Sunday, the students had time to explore Chicago, getting to sightsee and go shopping. “Me and my friends went shopping for a while at various stores. Then we went and saw The Bean,” Johnson said.

Then, everyone went to the Willis Tower, which is one of the tallest buildings in the world. “We went all the way to the 103rd floor. We stepped onto the indoor skywalks, which hangs over edge of the buildings. It was hard to see because we were basically in a cloud, but it was still cool,” Johnson said.

To end the trip, the students got to see Blue Man Group. “It was a trio of men who were all painted blue. They didn’t talk at all and they kept straight faces. However, they did skits and interacted with some audience members. Somehow, it was actually funny,” Johnson said.

Co-Choir Director Adam Petroski was responsible for organizing the trip. “It took a lot of months to prep, so it was nice to finally experience it all,” Petroski said.

Overall, the trip was a success, and the students were able to have fun as well as perform. “I had a great time,” Rooney said.