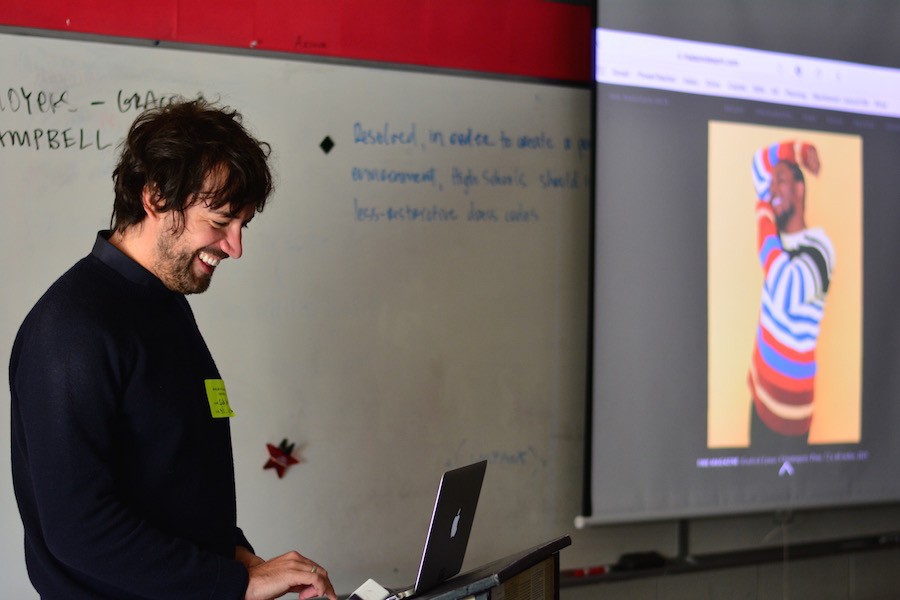 Heck visited Journalism classes to discuss his work in photography.

Erik Madigan Heck, a 2002 graduate of BSM, recently returned to Minnesota to receive BSM’s Distinguished Alumni Award.  Since graduating, Heck has become a world-renowned fashion and portrait photographer, photographing a variety of famous people and places.  In addition to accepting the award, Heck also took time to speak with the Journalism classes about his experiences in the industry.

Heck has had incredible success as a photographer, taking photos for notable magazines such as The New York Times Magazine, The New Yorker, Vanity Fair, Harper’s Bazaar, and British Vogue. He received Forbes Magazine’s 30 under 30 Award, and most recently photographed Adele for her Time Magazine Cover.

When starting out in the fashion photography business, Heck approached as many fashion designers as he could, hoping they would give him an opportunity.  “I would just find fashion designers that I liked and ask if I could take pictures for them for free. I was basically a door-to-door salesman,” Heck said.

As the years progressed, he began to do more photoshoots on a higher scales. Then, in 2012, Heck shot the Neiman Marcus Art of Fashion campaign, which he considers his breakthrough into the photography world. He became the youngest photographer to cover the shoot. “That [shoot] pushed me into a different category of photography; I was the youngest person by decades to do that campaign,” Heck said.

Since then, Heck has been traveling around the globe for work, splitting his residency between New York City and London. He has also had the opportunity to photograph high profile celebrities, such as Kendrick Lamar, Lupita Nyong’o, and Nicki Minaj. Most recently, he had the honor of shooting Adele’s Time Magazine Cover.  “[Adele] was very down to earth and humble.  We were high-fiving throughout [the shoot] and she gave me a hug; everything was cool,” Heck said.

Although Heck’s most notable works are of celebrities, recently, his favorite photoshoots are ones that involve more abstract pieces. “I shoot so many people [for work], so I really enjoy landscape work; when it’s up to me, I try to shoot anything other than people,” Heck said.

Heck cites his success due to the long hours he puts in, and his personal work ethic. “We work twelve hours a day, and even that isn’t enough. Every job we do is very high pressure, so I try to not take myself too seriously,” Heck said.

Before he left, Heck gave one last tip of advice. “No matter what you want to do, because we live in a competitive world, you’ll only be successful if you work super hard and do something that’s different from everyone else,” Heck said.