I ate my Crocs 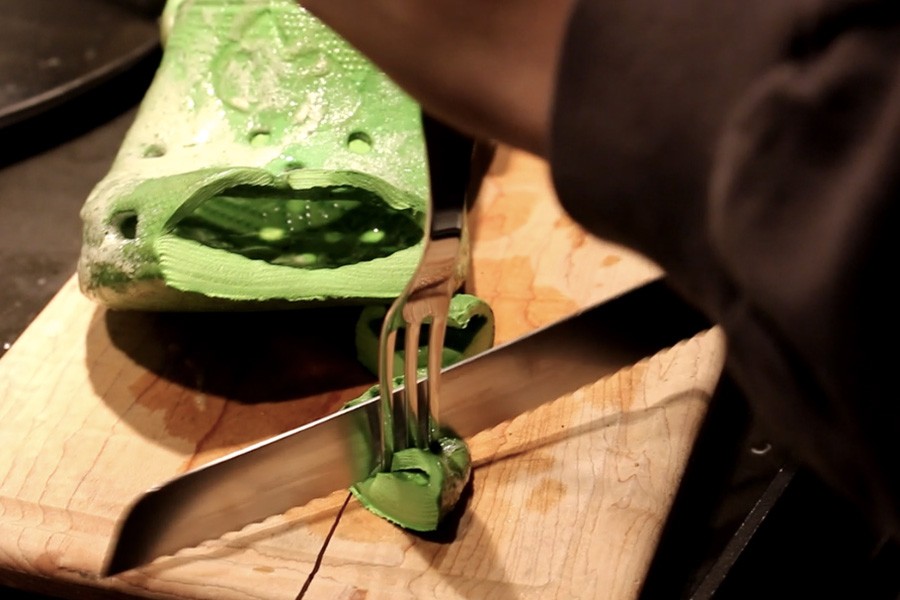 Gunnar Lundberg slices into the Croslite and prepares to take the culinary plunge.

I pride myself in fearlessly donning my bright green Crocs, even if I’m accused of dressing like a fifth-grader from 2008. I’ve worn these colorful, comfortable, low maintenance shoes since they burst on to the scene more than ten years ago. Although waning in popularity, Crocs are still easily recognizable by the vast majority of the world. If you know anything about the Croc scene, you’ve probably heard the urban legend that if you’re stranded on a deserted island, or lost in the woods, Crocs are a viable source of survival if you boil them down and eat them. Technically speaking, Crocs are made from a closed-cell resin called Croslite™. This soft, comfortable, lightweight, non-marking and odor-resistant foam gives Crocs their unique texture. Although not advertised as edible, Croslite™ is non-toxic, meaning theoretically no harm should come to you if consumed. I decided to put this myth to the test.

I put a large pot of water on the stove and added my lime green Croc when the water started to boil. I also added some salt, pepper, and a little bit of extra-virgin olive oil to combat the years of dirt and sweat embedded in the shoe. I periodically checked the status of the Croc, and as time passed the shoe became more and more pliable, but would never really completely boil down. After twenty minutes, I decided it was as soft as it was going to get, so I removed it from the water and carved it like a perfectly cooked ham. The shoe was very soft and cut like butter, but as the moment grew closer I became more skeptical of my mission– this shoe did not look edible.

I served the piece of Croc with a side of Sriracha dipping sauce–– I needed any excuse to put this malformed rubber in my mouth. Surprisingly, I found two other BSM students willing to eat Crocs. I sat down with my two tasters and after a few deep breaths we dug in. The Croc was very chewy but didn’t really break apart in our mouths. “It actually wasn’t that bad, you just couldn’t eat it” said Croc taster and BSM senior Anna von Kampen. The only thing I can compare the taste to is that of a cheap mouth guard you chew on while playing sports. Realizing I needed a smaller piece to actually swallow any of the Croslite™, I cut a bite size piece, chewed it thoroughly, made the sign of the cross, and swallowed. The small piece of foam sat in my esophagus for what seemed like hours, and I could feel it uncomfortably lingering whenever I swallowed.

In conclusion, Crocs may be non-toxic, but that definitely does not translate into them being edible. If you’ve ever stranded on a deserted island with a friend and Crocs appear to be your only food source, take my advice–– eat your friend before you eat your Crocs.