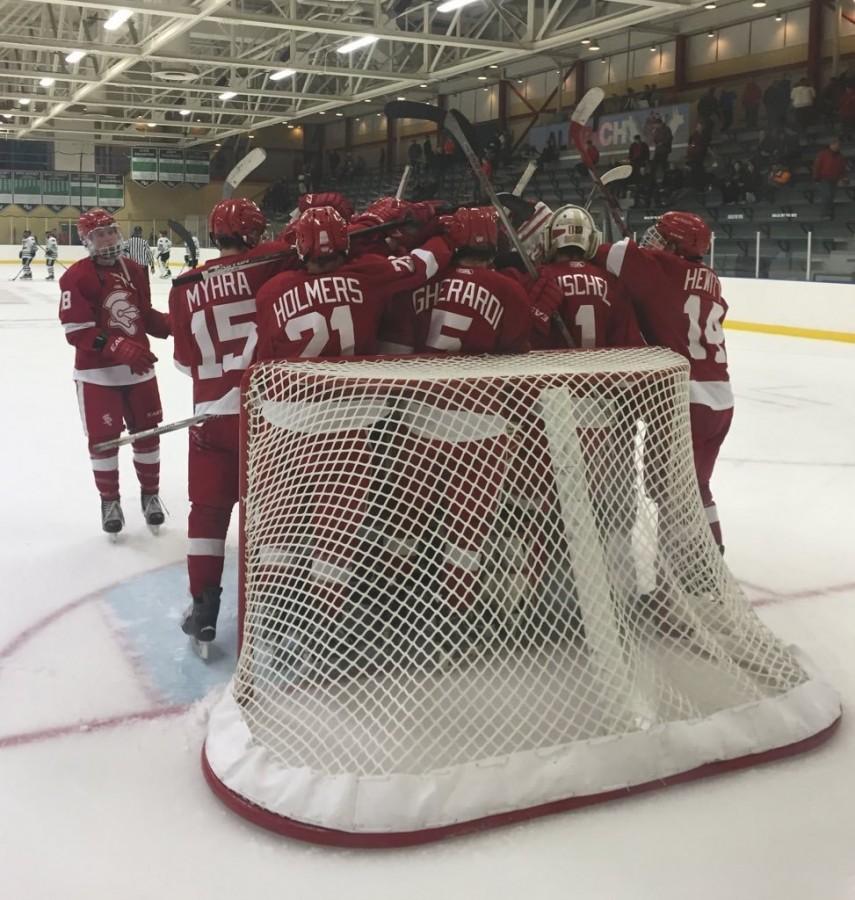 The Red Knights parade around the net after a 4-2 win over Woodbury. The team is currently 12-0-1.

The BSM Boys’ Varsity Hockey team has not had much of a roster change this year as they graduated four seniors.  The new additions to the team are seniors Jack Qualen, Dan Myrha, Sky Brown, and junior Stefan Garcia.  The team is led by senior captains Zach Risteau, Auggie Moore, Nick Austin, and Peter Heimbold.

Head coach Ken Pauly “does the heavy work,” according to Risteau.  They also have a defensive coach, John Russo, an offensive coach, Troy Riddle, and a goalie coach (and “team comedian”), Tom Klein. “Coach Pauly has been coaching high school hockey for over 20 years, and it’s great to have “Rids” around because he’s played at the highest levels of the game, and can relate really well,” senior captain Auggie Moore said. Together, the captains and coaches can help the team reach their goals.

According to Risteau all of the captains bring something to the team in a different way.  Austin is the one who makes sure everyone is in the right state of mind and stays focused, no matter what the score is.  Heimbold is the “meathead” of the team and makes sure everyone is working out.  Moore is one who gets everyone going and is very vocal on the bench. Risteau is the captain who holds the boys accountable and shows the leadership on the ice.

To make sure they were ready for the upcoming season, the upperclassmen got in the weight room during their free hours.  Also, during the summer training program, they made sure that they were being very competitive during their 3v3 Klein Cup Tournaments.

The boys have some good competition in their schedule. These teams include Eden Prairie, Wayzata, Lakeville North, and Grand Rapids, but the boys are not too anxious about the tough schedule.  “We’ll just play our game and everything will work out,” Risteau said.

As they look at their section opponents, Wayzata and Edina are solid competitors in the Section.  “We play Wayzata during the regular season, so we will know what to expect from them in the playoffs (if we play them)…Edina is a very young team, and we don’t play them during the regular season so if we do play them in sections, it will be kind of a ‘young vs. old’ matchup,” Moore said.

Currently the Red Knights are 6-0 and have a matchup with Eden Prairie on Friday, December 11.  This is the rematch of a heated Section 6AA Semifinal last year that ended in a brawl.