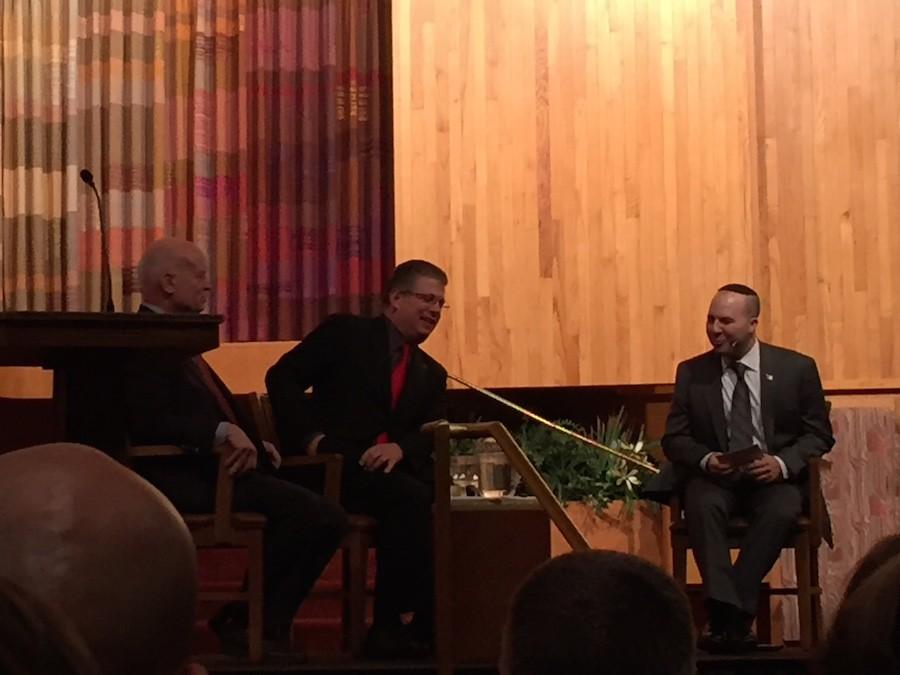 The Beth-El Synagogue hosted Mr. John Donovan and Mr. Gary Powers Jr., the sons of James Donovan and Francis Gary Powers, the inspirations for the recent movie Bridge of Spies. On Thursday, December 4th, Donovan and Powers visited  Beth-El to discuss their fathers’ stories, their own stories, and their opinions on present-day American politics. They spoke as part of the Beth-El’s “Heroes Among Us” speaker series, in which the synagogue honors troops by inviting speakers involved in the military to speak at their Synagogue.

Before the event started, Donovan and Powers spoke at a VIP only gathering, where they signed copies of “Strangers on a Bridge,” the book that the inspired the movie and was written by Mr. Donovan’s father. There, they also answered one-on-one questions before talking to the whole crowd in the Spiegel Sanctuary of the Synagogue. They spoke more in depth, offering a more personal take on the story. They  focused more on their points of view and how they felt about the events that took place, not just the story itself.

Powers was sentenced to ten years in prison in harsh conditions under the Soviet Union. After only one year and nine months, however, he was freed from imprisonment after a trade between him and Rudolf Abel, a Russian spy who had been captured by America years previously. The trade was made in large part because of American lawyer James B. Donovan, who had defended Abel in court after he was arrested. On February 10, 1962, Abel and Powers were traded on the Glienicke Bridge, which connected West Berlin and East Berlin.

When speaking to the crowd, Donovan discussed how he not only learned a lot through his father’s stories as well as first hand experience. When he was only 18 years old, his father took him on a trip to Cuba where he met Fidel Castro, the dictator of Cuba at the time. His father was trying to negotiate for the lives of roughly 1,100 Americans who had been captured at the failed Bay of Pigs invasion. His father successfully had all of the prisoners released in exchange for some humanitarian aid.

Powers, Jr., spent a long time looking for what he wanted to do in life. He was a young child when his father was working with the CIA, so he didn’t understand that nobody had the same situation at home as he did. “I had no idea that people would be shocked by my father being shot down, it was something that was commonly discussed at home. I was confused when everyone treated it as such a big deal,” Mr. Powers said.

His museum opened on November 11, 2011, in Vint Hill Farms Station, Virginia, over a Cold War era communications base that was used to monitor foreign embassies during the Cold War.

The night ended with Donovan and Powers answering questions that the audience submitted to them, then signing more autographs. “The experience was really interesting. I learned a lot of things that I didn’t know from the movie. It was a great experience,” attendee and sophomore Alex Kang said.