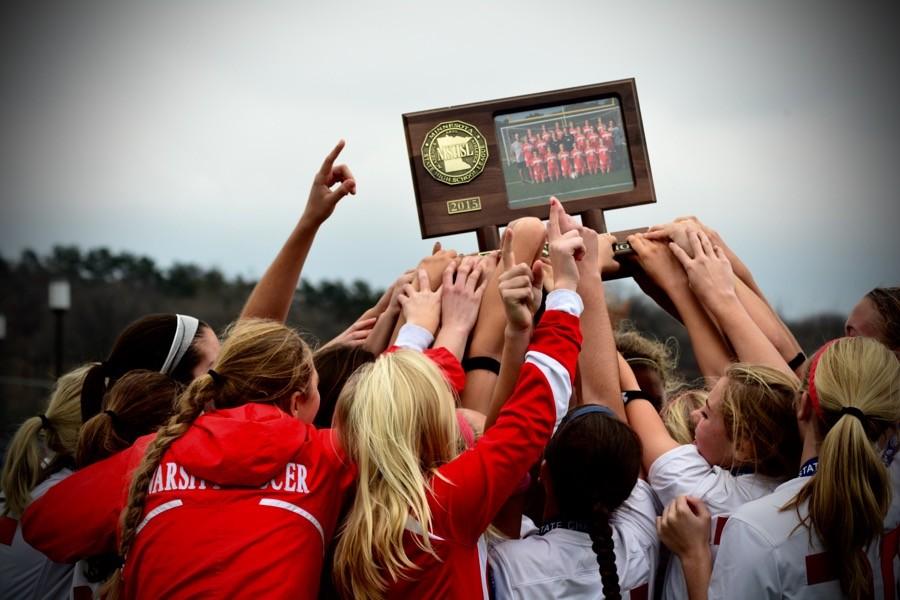 The girls proudly hoist the State Championship trophy for the third time in the last four years.

The girls’ soccer team has established a dynasty over MSHSL Class A girls soccer, as the team defeated Orono 4-2 on Thursday, November 5, to take home their third State title in the last four years.  The team beat Orono for the second straight time this season, after a 1-0 victory on September 8.

The scoring started just 84 seconds into the game, as Ms. Soccer Aleksa Tataryn scored yet another goal of the postseason to make it 1-0 BSM.  Twenty minutes later, Orono scored to tie the game at 1-1, and the score would remain this way to halftime.

The second half saw the Red Knights gain a comfortable lead over the Spartans, accumulating 3 goals in a span of less than 4 minutes.  In the 57th minute of the contest, Tataryn scored her second goal of the game, this time assisted by sophomore Maddie Stoks, to regain the lead for BSM.  Three minutes later, freshman Amanda Cassidy fired one into the net, assisted by senior captain Sophie Roux, to give the Red Knights a 3-1 lead.  Less than a minute later, Stoks had a goal of her one and Tataryn recorded her third point of the game to make it 4-1 BSM.  Even though Carly Goehring of Orono, who was up for Ms. Soccer along with Tataryn, scored her second goal of the game shortly thereafter to make the deficit only two goals, the defense was tough all throughout the game, and sophomore goalkeeper Claire Grazinni had 6 saves total to clinch the elusive State title for the Red Knights.

As the Red Knights add another State title to the BSM trophy case for the third time in the last four years, this team has established a dynasty in Class A girls soccer. Even with the loss of a host of talented seniors, the Red Knights are a sure bet to be a leading contender for the State title next season as well.