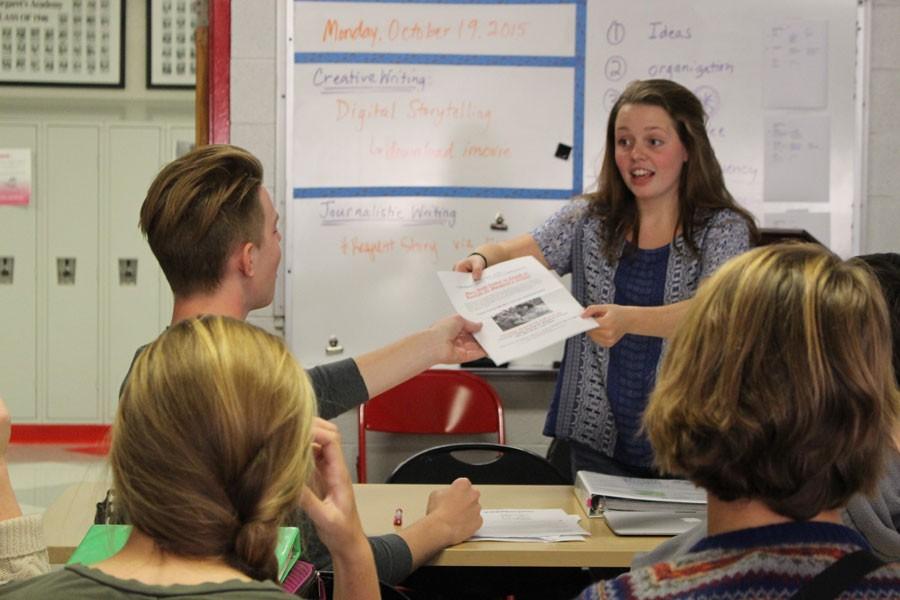 Junior Josie Ross, who organized the many events revolving around Mary Beth Tinker's visit, is excited to have Tinker speak at BSM.

Every American has rights. The Constitution, Bill of Rights, and United States Supreme Court all exist to ensure that those rights are maintained. However, when certain situations arise, a person’s rights can be restricted. High school is one of those situations. School leaders hold so much power over its students that some Supreme Court cases have occurred specifically to decide whether or not students have certain rights and how far those rights go. One such case is Tinker v. Des Moines Independent Community School District (Tinker).

The Vietnam War resulted in one to three million deaths between both sides, along with civilian casualties. These numbers and the television coverage that the war received caused widespread protest throughout the country and among every age group. An eighth grade student from Des Moines, Iowa, Mary Beth Tinker, decided to show her respect for all of the lives lost. Tinker, along with her siblings and another student, wore black armbands to mourn the death on both sides of the war and to protest against the war. This caused disruption within the school and the school board. The school board suspended the students and attempted to ban the armbands. In response, the Tinker family sued the school board for limiting their freedom of expression.

The Supreme Court has since been hearing cases about limiting students’ First Amendment rights. Bethel School District v. Fraser states that sexual phrases or innuendo used during official assemblies are not protected by the First Amendment. Hazelwood v. Kuhlmeier gives schools the right to control school newspapers if it is for educational purposes. The Tinker case has been the basis for much discussion about how much control schools have over their students.

Tinker’s experience inspired her to go around the country and inform high school students of their rights. She has been traveling on what she has dubbed the “Tinker Tour” since 2013. Junior Josie Ross, who heard about this tour, decided to take the opportunity to bring Tinker to BSM. “I knew that we could benefit greatly from this opportunity. Especially as a private school, it is important for us to learn about our rights,” Ross said.

On Thursday, Tinker will be giving a presentation to all of the AP United States-Government and Politics (AP Gov.) classes.“She will be primarily talking about student free speech issues and just making students aware of the First Amendment and how that applies to their lives,” AP Gov. teacher Mr. Ken Pauly said.

The AP Gov. classes will be using the Tinker court case to show the process of bringing a case before the Supreme Court. “We will also be using it to look at the implications of the case and what implications regard students and their lives,” Pauly said.

Additionally, Tinker will be talking to the journalism class about their rights as journalists. She will also be giving a speech at 3:00 in the chapel after which there will be a panel hosting a Q&A session. The panel will also include Thomas Wieser who is a lawyer for student rights, Steven Eckert who is the head of the investigative journalism team at Kare 11, and principal Dr. Sue Skinner.

Of course, there is one significant difference between Tinker’s school and BSM: BSM is a private school. That greatly affects student’s rights, or lack thereof. “There is no question that we have more leeway than public schools and that will be part of the discussion,” Pauly said.
Private schools hold more power over their students because they are not governmentally  controlled; they only have to conform to certain state regulations. That means that the First Amendment applies differently to private school students. “I think it is important for students to know how it works at a public school level, but also how it does or does not apply to a private school,” Pauly said.