Elizabeth Kupchella has stuck her foot in the door of the political field by working as a campaign intern for state representative candidate, Peggy Flanagan. 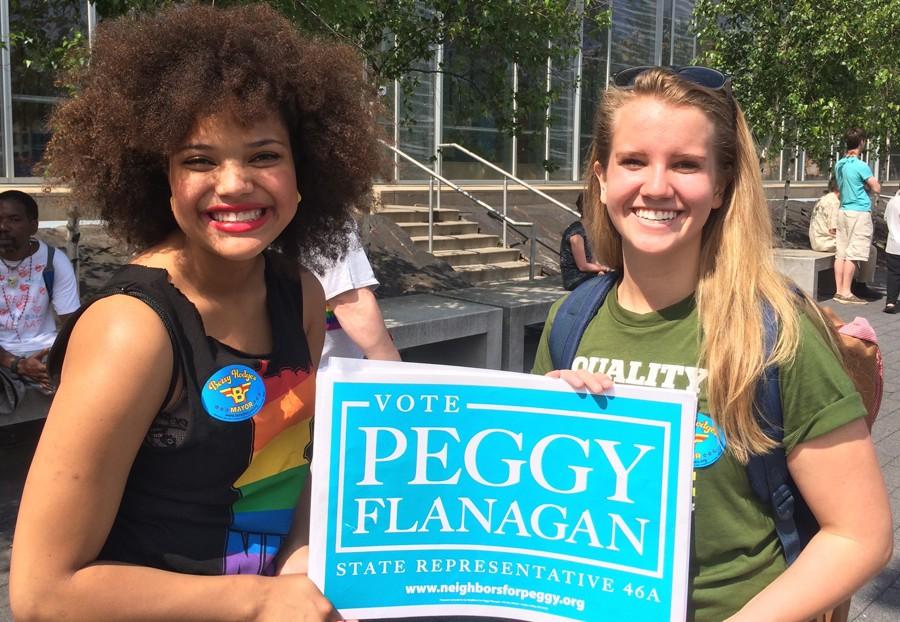 Whether it’s a license, a first date, or even a first job, we seem to put a lot of emphasis on milestones. I’ve never liked that. I don’t want my age to determine the amount of involvement or impact I can have, and the reality is, it doesn’t––for anyone.

I’m incredibly lucky that lesson was reiterated time and time again throughout my amazing internship this summer at womenwinning, a group that helps to elect women into public policy. Though I trained with the organization itself, I spent most of my time campaigning for a womenwinning-endorsed candidate, Peggy Flanagan, who’s running for the Minnesota State House.

I would strongly recommend interning at an early age. Just one example of the networking and résumé opportunities the experience provides are the days we trained. We learned how to work hands-on as a team with our co-interns, enter data, communicate in the political field, and more. I know I’m not alone in having this kind of learning experience: “Lessons in the classroom will never replace the things you learn about yourself in a hands-on role,” Emma Grundhauser, womenwinning intern, said.

Campaigning and policy work isn’t always easy. In 2002, my mom worked for the Governor of Minnesota. She campaigned, she talked to the media, and she worked harder and faster that I’ve ever seen anyone work. I remember my dad taking her to the doctor’s office and her admitting she couldn’t remember the last time she had water.  She lost weight and a lot of sleep. But she won.

Of course, our campaign isn’t nearly as intensive as that, but it always takes hard work.

There’s a secret ingredient in any well-run campaign: the people and the mission have to be strong. Our campaign has hit our fair share of roadblocks and obstacles; you power through those hurdles if you care. That’s the catch to campaigning. You have to believe in somebody to work hard for them. I learned what that meant when I met Flanagan.

We’re running unopposed, but the work is the same.  A lot of people ask why we work as if we have an opponent. “Campaigns aren’t just about opponents and what we’re working against. They’re about what we’re working for and the vision we’re creating together,” Flanagan said.

This summer, I realized the value of youth power.  Nobody needs to be a certain age to make a difference.  I don’t regret the days I’ve dedicated to recruiting volunteers for events.  I don’t mind the data-entry and the emails.  None of that bothers me, because one of my mentors will be seated at the Capitol soon, and even though I’m still in high school, I can say that I helped make that happen.  I think that’s pretty cool.