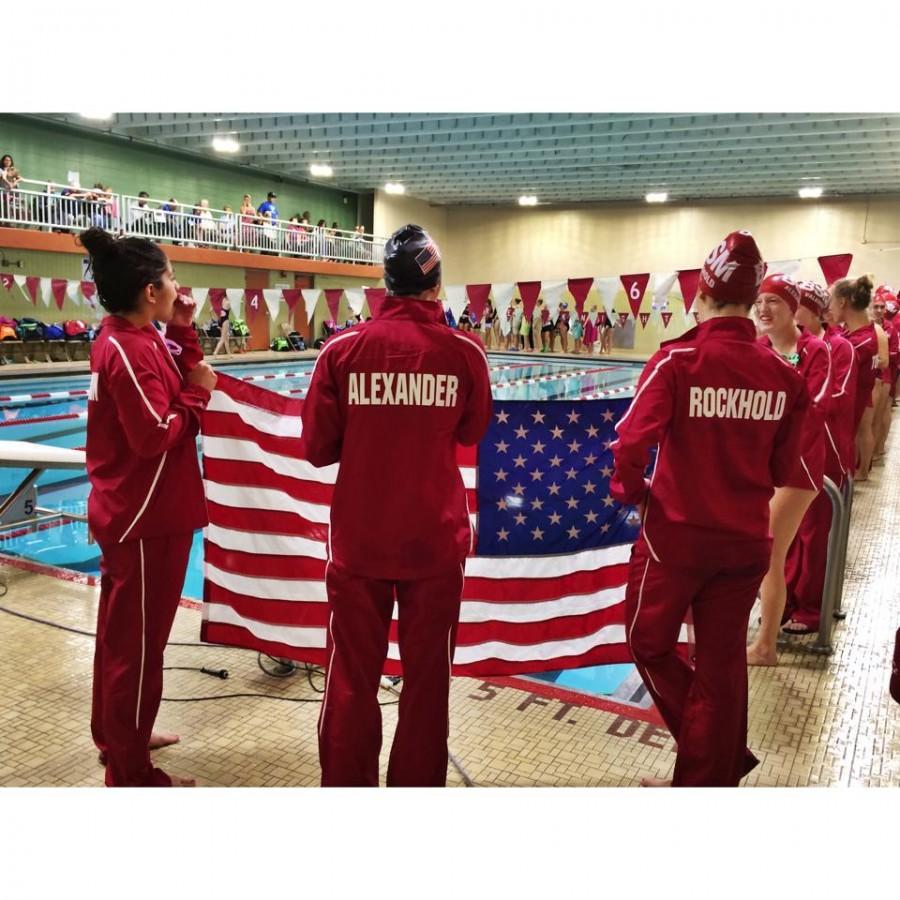 The former captains of the team hold the flag before a home meet last season.

Energetic and ready to compete, the BSM Girl’s Swim Team is looking forward to their season this fall. With two wins already earned against Blake and Bloomington Jefferson, these swimmers, led by senior captains Kelly Johnson, Celia Smithmier, and Grace Hedin, are pumped to continue competing throughout the season. “Winning the first two meets was great and we’re really excited for the rest of the season,” Johnson said.

The girls swim team is led by head coach Damon Carrison and assistant coach Jon Weidenbacher, who is known by the girls as his team’s given nickname, Weeds.  They will play a huge part in the swim team’s future success.  From planning practices to putting specific swimmers in events that they will be successful in, the coaches will be positive influences in the girls’ success over the season. “They have been great this season and they really help the team to be the best,” said Johnson.

Besides their captains, the girls swim team has some swimmers that make a big difference to the team.  Bringing energy, kindness, and talent to the team are juniors Madison Semler and Maria Satre.  Not only do they assist the team in winning meets, but they also provide a boost of team morale and enthusiasm.  “They’re both really talented swimmers.  Madison is always energetic as well as Maria who is so fun and nice,” said Johnson.

Like they do every year, the swim team is hoping to get a few of their swimmers to state, as well as perhaps breaking a couple of school records, including in the 200 medley relay, 200 free relay, 400 relay, and the 100 free.  “We had some really good times last year so they might be hard to beat, but I think that we can do it,” said Smithmier.

With a great record so far, the girls swim team is excited to continue with their season. The captains are optimistic, the coaches are dedicated, and the team is eager to compete.