Cut from the play: Sadness in three acts 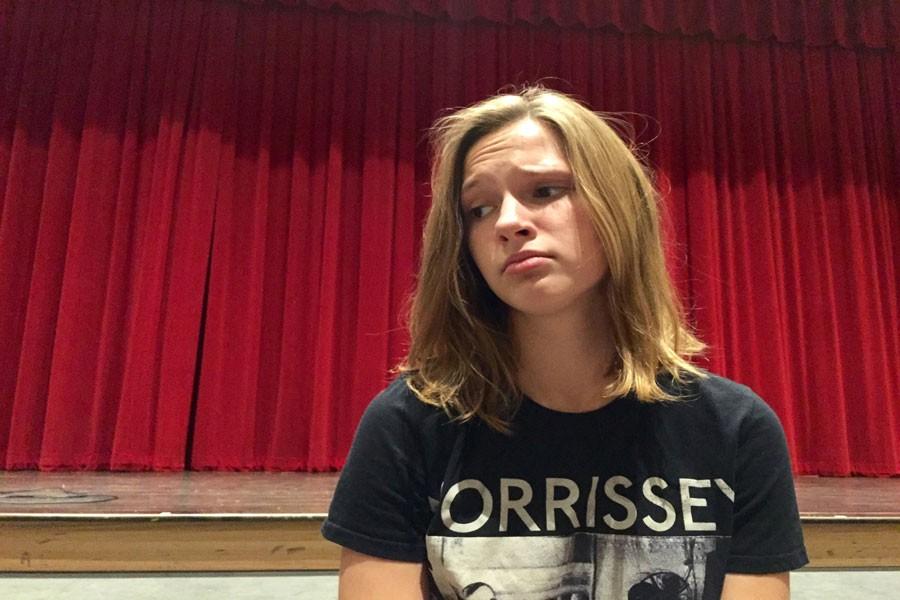 Emma grieves over her failure to be a part of any BSM production to date.

Every year in the spring and fall, BSM hosts a different theatrical production. The show usually runs for two weekends, three shows a weekend, totaling six showings possible for viewing. I have always attended every performance––to show off my extravagant appreciation and support for good theater.

This year, I decided I wanted to be a part of the wonderful thing I had always watched from the audience,  and––yep, you guessed it!––I tried out for the fall play. Suddenly surrounded by all the god-like actors and actresses that I had admired on BSM’s stage, I was sent into a tense state. I even got cold sweats merely standing next to the freshmen I had seen in the Junior High plays.

Since it was my first audition, I wasn’t completely heartbroken during the very High School Musical-esque moment when the cast list was posted and my name wasn’t on the list, embellished broadly in all caps. I did feel a little pang in my chest, though, because I thought I completely nailed my prepared monologue. As a diligent as a theater SuperFan, I went to all six fall shows of The Legend of Sleepy Hollow––attempting to hide my bitterness––still clapped and enjoyed the exquisite production that the Drama Department never fails to provide, all while making the decision to pull out all the stops for the auditions for the spring musical.

When spring auditions finally rolled around I was more than ready for my on-stage redemption. I was a second semester junior, so I felt like an accomplished scholar rather than a first-month-of-school-freshmen, and I wasn’t going to hold back. I auditioned––and I mean auditioned. I serenaded the directors with my sweet, sweet voice and I frolicked and showed off everything Emma Kathrine Johnston had to offer the BSM Drama Department officials.

Evidently, they weren’t impressed. All of my assumptions of a larger cast with next to zero cuts were thrown out the window. There was indeed a larger cast; I just was not a part of it. This time, it was personal.

As much as I hate to admit it, being cut a second time was dream-shattering. In a musical there are leads, smaller leads, smaller speaking parts, even smaller speaking parts, and chorus members who don’t speak and just contribute to the mass of singing and dancing. I didn’t even get a chorus part. It’s one thing to feel like you aren’t good enough for a lead role, but apparently I was not even talented enough to stand on stage and, at the very least, pretend that I was singing.

The blow lasted longer than I would like to admit. Sheryl Crow said it best: “the first cut is the deepest.” But in my case the Drama Department was twisting its knife further into my already depressed heart.

Naturally, I told everyone and their mother about the obvious corruption of the BSM Drama Department: how they don’t know a star when they see one, and how it was their loss, and how I was better off without them. I even put it in my NHS application: that even though I had not actively participated in a BSM theater production, I had actively cried about not getting into one––oh, wait, make that two. I strongly considered boycotting the play, but I only had the gumption to miss one of the shows. Musical theater speaks to my soul; I won’t deny that.

I say with a clenched fist that the Drama Department pulled off a fantastic production of Urinetown… one that could have only been made better with the musical theater skills of myself, but then again, I’m biased.

Though it was a huge blow to my morale, and still is, I have moved on. This year is a new year, and I will sure as heck hop on that stage and shake what my mama gave me one last time. I am hoping that I’ll be able to cash in all my senior points and snag the lead. As for now, I am just sitting on the sidelines––or in the audience––saying, “Put me in coach! I’m ready to play!” (pun intended).