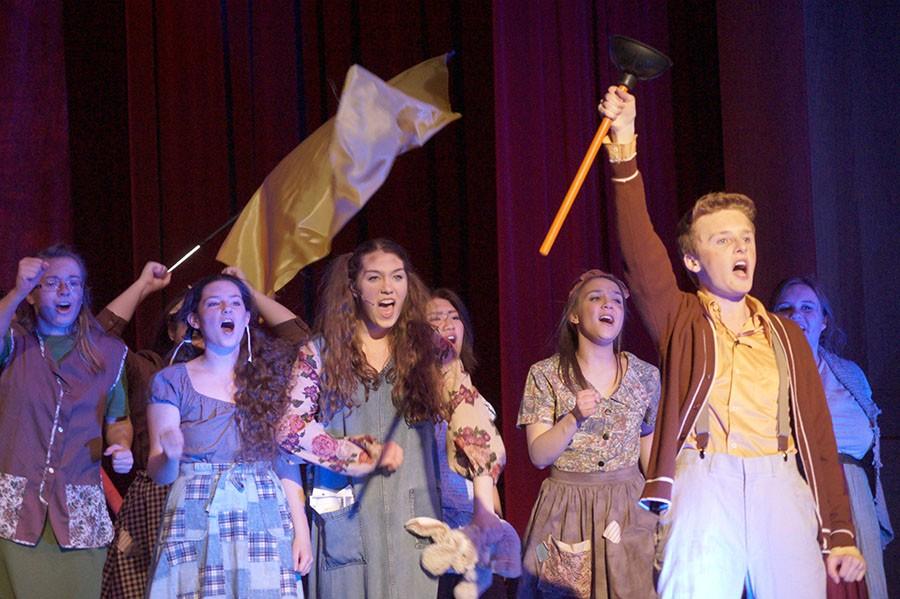 Donations from the audience are welcomed to raise money for safe water access around the world. (photo courtesy of Joe Blake)

Fantastic. The only word that seems to sum up the Urinetown musical. It has a fantastic storyline, tremendous dialogue and sensational acting. The story takes a fearless approach towards the dangers of over consumption and blindly giving in to the demands of big business. It takes on political and police corruption, suppression of the will of the people, and the destructiveness of our consumption.

Set in a world where big business has corrupted the political system, natural resources are running low, and instead of protecting the people, the police are used to scare the people into complying with outrageous laws and demands, the play showcases a town, where over consumption leads to a water shortage, and all public amenities being regulated and controlled by a private corporation, Urine Good Company, or UGC. People are forced to pay to use the restrooms, and those who can’t pay are taken to Urinetown. No one knows what Urinetown is, only that if you go to Urinetown, you don’t come back.

Narrated by Officer Lockstock, played by senior Colin Sheeley, aided by Little Sally, portrayed by senior Jackie Lawyer, the story revolves around young Bobby Strong, played by senior Luke Guidinger, as he tries to find a way to fight against the tyranny of UGC CEO Caldwell B. Caldwell, played by junior Alec Lawrenz. The cast perfectly enacts the hilarious and outrageous scenes from top to bottom. The lighting and sound crew did an amazing job as well. The play is a must see, with showings on Saturday at two and again at seven, and on Sunday at two, and I would recommend seeing it more than once if you can. Just remember to bring your change, you might have to go to the bathroom.