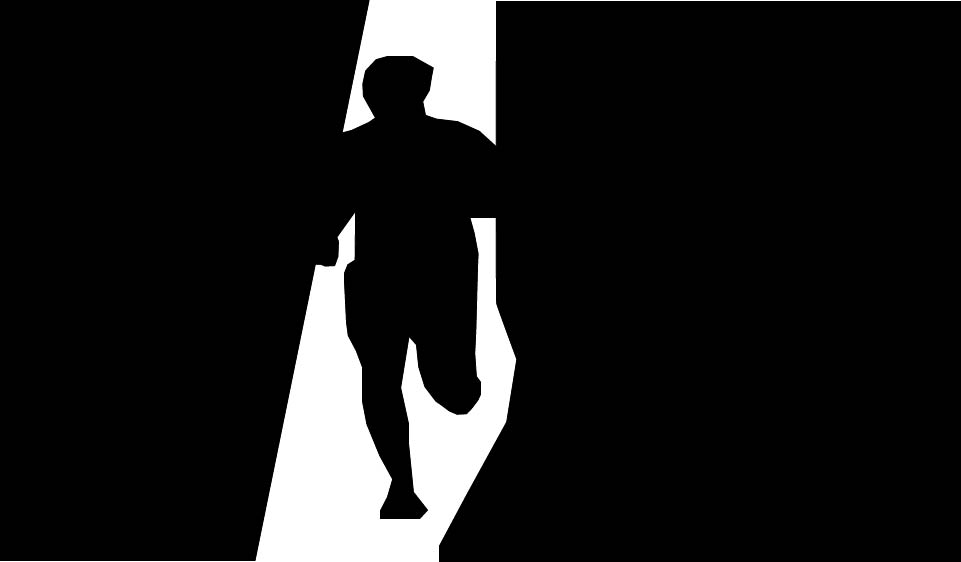 John had no idea where he was. He slowly blinked his eyes open, getting used to the strange lighting surrounding him. The speaker on the wall garbled out a series of indecipherable sounds in a slowly dying electronic voice. Rising out of his low cot, John got a good look at his surroundings.

He was in a small cement room, maybe ten feet by ten feet. In the corner was the finally deceased speaker, next to a flickering yellow light. Behind his head was a mostly torn, very worn pinup poster of Yvonne De Carlo. To his left was a beaten-up dresser, with a layer of dust on top at least half an inch thick. On the top of the dresser was a radio, playing only a soft static. To the right was a thick iron door. The back looked as though it could take a hit from a howitzer without a problem. Next to this door was a desk strewn with folders and papers.

Rising stiffly to his feet, John walked over to the desk, figuring that something over there might be able to tell him where he was. Picking up the folder closest to him, John got to reading.

In big block letters, the front of the folder read:

Stowing the folder under his arm until he could focus on reading it, John cautiously opened the door. The hallway was pitch dark, except for a flickering bulb at the end of it. Feeling his way down the corridor, his hand brushed against a panel on the wall. Blindly, he opened it. Inside he found a flashlight, a first aid kit, and (by the feel of it) a Smith and Wesson .38 Special. Fumbling for the ammunition strewn around the inside of the metal box, John finally felt somewhat secure. Holding the flashlight in one hand, and the gun in the other, he crept down the hallway, following signs posted on the walls that said in faded print:

Rounding one last corner, John found the room. Sweeping the room with the light, and making sure he was totally alone, John stood up. Thinking that finding the light switch might be a good idea, he started searching. Scouring the cement walls for anything that could give him light, he found nothing. In desperation, he kicked the air. Sudden pain shot through his foot and his leg, doubling over in pain, John brought the flashlight around to see what had attacked him. It was a generator. Next to it were a few cans of gasoline, and on top was a funnel. Stranger, there was a pipe of sorts leaving the top of the generator and leading into the wall. Figuring it must be for the fumes, John wondered if the thing was a viable power source. Getting on all fours to investigate further, John found a series of cables disappearing into the wall.

After pouring the gas into the hatch at the top, John stood. “Here goes nothing”, he thought to himself. Grabbing the pull-handle, he started the thing. With a grumble and crank, the machine sputtered to life. Sighing with relief, John turned off his flashlight and the lights around him flickered on. Slowly, a record player that John had not originally noticed scratched on, and the song “Sheila” by Tommy Roe came on. Sitting in a thick leather chair, John began to get a feel for his surroundings (for the second time that day).

His chair was pushed out from an equally luxurious desk, which itself had a thick layer of dust on top, and a small reading lamp. The chair and the desk were the only two pieces of functional furniture in the entire room; many of the other pieces were broken and in heaps littering the center area of the room.  On the carpeted floor, half-burnt pieces of paper and folders were strewn. Bending down to pick up the one closest to him, John read:

The “k” in the middle was slightly burnt away, but the rest was decipherable. The rest of the paper was burnt to a crisp, and its secrets with it. Remembering suddenly the folder he had found in his cell, John scrambled.

“Did I leave it by the panel?” He questioned the inanimate room.

“Probably”, he thought with regret. Slowly pulling himself out of the chair, John ventured once more into the dark hallway.

Finding his way back through the darkness of the hallway, John came back upon the panel. Opening it, his light exposed something he didn’t expect. Multiple weapon stocks were inside this panel, and what was that? A scope? Putting the flashlight between his teeth, John grabbed one of the rifles, checked the slide, and quickly field-stripped it–just to make sure it wasn’t broken.

“Hold on.” He said to the darkness. “How did I know…how…what?”. Confused, he became aware that he knew the rifle was a M14. Chambered for 7.62 NATO, it could take out most living things with a single well-placed shot to the chest.

His head suddenly felt like it was split in two. Slinging the rifle around his shoulder, John grabbed three or four of the magazines from the bottom of the paneled box, and found three cases of 7.62 ammunition, 150 rounds each (contained in belts of 50). Carrying them back through the dark to the main room, John fought his headache. It felt as though some being had placed their hands on the sides of his cranium, and they were pushing with all their strength.

Finally making it into the room, John set the weapon and ammunition on the desk with a grunt. Turning back around, he knew had to go back out of the light to find that folder. Forcing himself to walk back out, he turned the flashlight back on.

Dropping a trail of bullets out behind him, John wandered the halls of the complex, searching for his original cell, or the panel itself.

After an hour of fruitless searching, John heard the familiar sound of a dying speaker speaking in unintelligible words, and could see a slight light in the distance. Breathing a sigh of relief, John started forward. Passing his cell, he decided to stop inside to grab as many of the folders as he possibly could. John leaned inside the doorway, and gathered all of the folders left on his desk. Continuing on his way, John finally found it: the panel.

“Thank God above,” he said to the black mass around him. Looking at the ground ahead of him, he could spot the folder laying in the dust and rubble on the floor. Picking it up, and knocking all of the dust on it off by hitting it on his leg, John could at last go relax in the main area.

Wearily setting his things down, John plopped down on the chair, and opened the first folder?the one he had just recovered from the darkness. Rubbing his eyes, John flipped the folder open, and began to read:

Flipping to the next report, John continued to read:

Underneath this was a the same symbol as on the front.

Shaking his head in confusion, John stood up, and began to pace. Those names, they all sounded so familiar. He knew his name was John Kennedy Fitzgerald, he knew that. But how could he know all of that other stuff? The truth of the matter was that he had to trust the folder. With no memory of what he had learned–only instincts–John decided he should go have a nice long talk with that Wolfgang Hein character. If his memory of basic geography could be trusted, Richmond was only a couple of hours south from D.C..

“Hold on, how do I know I’m in D.C.?” John asked himself. But, of course, he had no answers. His headache started back up.

Resolving to leave and go find Hein, John knew he had to find a way out. So, he picked up a folder from his pile, and leafed through it for a set of blueprints, or something. Doing this with the next seven folders, John finally found a general ground layout of his complex.

It looked as if the only possible exit he could get to from the “Alpha Section” was a small circular portal to the outside. It wasn’t very far, John knew he could probably make it in a few minutes.

John quickly ran back to his old cell, and grabbed a duffel bag marked “SUB. 2” off of the ground next to his bed. Next, he ran to the first panel he found, and filled all of the ammunition he could find for the revolver into the bottom of the bag. Two more flashlights, the first-aid kit, and about twenty dollars in quarters were all that were left. Stuffing those in the bag too, John stopped and took a breath. Shaking his head, he jogged back to the main room, where his rifle and the ammunition were faithfully waiting for him. John tossed three belts of bullets into the bag, and carefully disassembled the rifle, and placed that in the bag as well.

Checking off his various tasks on a mental list, John realized something–he hadn’t eaten. Regretfully looking around his cavern, he spied a box in the corner, half covered in debris. He could just make out the letters “M-C-I”. John ripped the box open, and took the packets hidden inside. He could eat later.

Finally ready to leave his crypt, John shouldered his bag. He picked up his map, and began his walk to the exit. On the way, he thought:

“What should I do once I’m up?” he asked himself.

“You need to go talk to Hein, he’s the only one who can actually help us figure this out”, John replied.

“Still, I could just walk away, and not be ‘Subject 2’ anymore.”

“You will always be ‘Subject 2’, do not ever forget that.”

“But what even is Brookline?”

“I’m sure we’ll find out from Hein, now shut up and pay attention, the exfil point is right there.”

Surprised, John looked up. A small hatch could be seen on the ceiling of the dark tunnel he was in, letting in a small ring of light. Feeling around for a ladder, John’s hand touched a leathery piece of fabric. Reaching out and holding it, John could feel that it was a…jacket. Not knowing if it would be cold out, John put the jacket on. Curiously, he could feel a small pocket under his left armpit. Reaching a hand in, John could tell immediately it was a shoulder holster, ingeniously stitched into the jacket.

Realizing his revolver was actually still in his pants pocket, John loaded and placed the pistol in his new holster.

John sighed, and continued on his search for the ladder. Finally finding it, John climbed up, and moved the hatch just enough for him to escape.

And he pushed his way into the blinding light above.