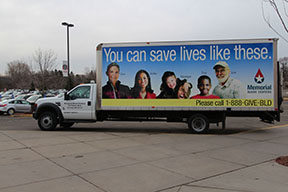 Every year the BSM National Honor Society hosts a blood drive for Memorial Blood Center. Many students and faculty alike show their support by choosing to donate to the worthy cause. But, of course not everyone can donate; there are health and travel restrictions, among a variety of others, all in the hope of maintaining a healthy blood supply. But there’s one restriction that no longer serves this purpose.

Since the HIV/AIDS epidemic of the 1980s, the FDA has banned men who have sex with other men (gay and bisexual men) from donating blood. Back when the disease was first discovered, it’s no wonder this was the case––no one knew what it was, how to test for it, or what it could do, and it presented a real and present danger to the overall blood supply. But it’s 2015, and we now know how to test for HIV/AIDS with extreme accuracy, making this no longer an issue.

Yet, the FDA claims that because gay and bisexual men engage in “high risk sexual behavior,” they are at higher risk of HIV/AIDS and other STDs. It’s true, gay men are disproportionately affected by HIV/AIDS in the United States, which is a true crisis that needs greater attention, but it’s also true that “African females aged 20-34, African males aged 25-49, and people with disabilities” are also at greater risk of HIV infection than the general population, and these groups are not barred from donating, nor should they be.

If the true aim of such a policy is to keep the blood supply as safe and clean as possible, then the FDA should reevaluate its policy allowing heterosexual individuals who have multiple sexual partners––who aren’t even asked the question of whether or not they’re in a monogamous relationship––from donating blood.

As it stands currently, gay and bisexual men are lumped into the same risk category––being deferred for one year before donating––as heterosexual persons who have had sex with someone who is HIV positive, and heterosexual persons who have had sex with a sex worker: groups that pose a much larger threat to the blood supply than a monogamous, young, healthy, HIV negative gay man and his partner. The assumption that gay and bisexual men engage in risky and sexually promiscuous behavior is naive and homophobic.

By deferring gay and bisexual men from donating for one year after having had sex with a man, the FDA is missing an estimated 130,150 men who would likely be able to donate 219,200 additional pints of blood each year.

But this isn’t just the opinion of a high school senior on the newspaper; the American Medical Association, the Red Cross, the American Association of Blood Banks, and America’s Blood Centers all call the ban both “medically and scientifically unwarranted.”

Even patient groups, such as the National Hemophilia Foundation, support dropping the ban, which could increase the potential blood supply two to four percent, saving more than a million people.

The current FDA policy can be classified as nothing less than outdated, unsafe, and discriminatory. The average gay man is no greater a risk factor than the heterosexual person in the donation line next to him; the FDA should lift the gay blood ban to save more lives.