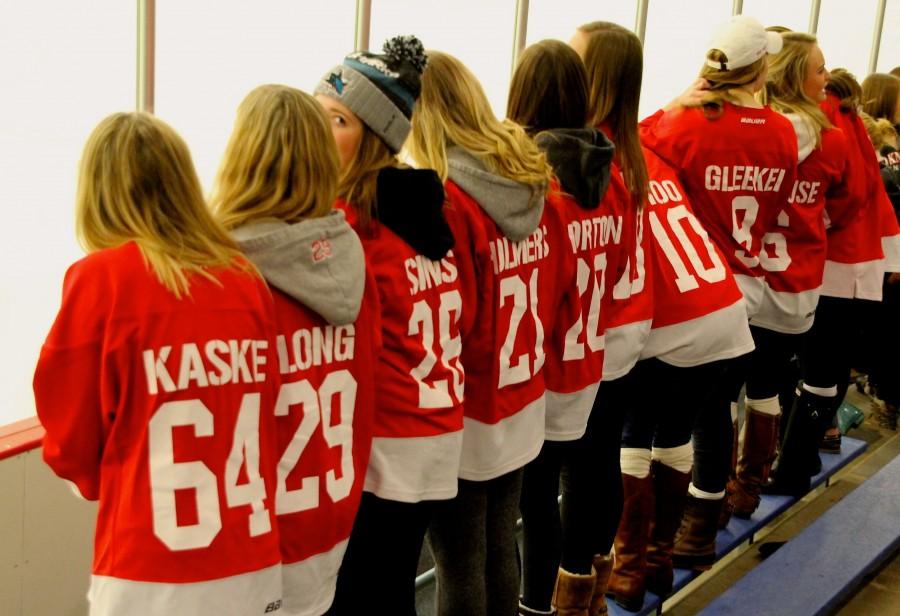 The Superfan jerseys have served as a bond between 21 girls at hockey games, and have also created a new method of fandom.

Although every BSM sport has its fans, 20 senior girls and one junior have decided to express their higher-than-average love for the game in a sleek fashion and emerging tradition: Superfan jerseys.

The boys’ hockey Superfan jerseys were started by the Class of 2011, but disappeared for the following two years. Last year, Class of 2014 alum Laura Lyon took it upon herself to restart the Superfan jersey program. This season, seniors Heather Hones and Anna Barger have carried on the tradition.

“We liked the idea of what the [Class of 2014] did last year, and we wanted to do something like that but try to find nice jerseys that were cheap,” Barger said. “We saw that the Wayzata [High School] girls had some Superfan jerseys, and we asked them where to get them.”

Each year’s group of Superfans assign themselves to a hockey player of their choice. “The girls are asked who they want on their jersey, and basically it is just first come first served from there,” Barger said. While the system may not sound the most organized, the process has gone with few bumps in the road.

The jerseys keep Superfans engaged in the games by cheering on the player they have on their back. “It makes you want to go to more games, and it’s fun to have a jersey to wear with someone’s name that you can support,” senior Maddie Houlihan said. “Superfans always sit by each other at the games; we bond over being Superfans and we root on our players.”

Over the course of the season, the Superfan jerseys have boosted the players’ morales. They appreciate the support from the girls who, by choosing to be Superfans, trek out to both home and away games regardless of how much homework or activities they have on any given night. “The feeling of support is great,” senior captain Ben Newhouse said. “Having your family there is a good feeling, but having a Superfan there takes it to a whole new level.”

The boys’ hockey Superfans are typically composed of members of the senior class, but this year, junior Allison O’Neil wanted to show her support for her boyfriend, Zach Risteau, by wearing a Superfan jersey.

This is the first time in Superfan jersey history that a junior has ever worn one. “Being the only junior Superfan tends to be a little awkward at times; I’m usually the one behind the camera taking pictures. It’s still great to be a part of the Superfans, though,” O’Neil said.

The Superfan jersey tradition will not die out anytime soon, as O’Neil will be carrying it on through at least the next season. “I do plan on continuing the Superfan tradition. I have even been deemed to control it next year by some of my classmates,” O’Neil said. “I have also gotten requests already from girls on whose Superfan they want to be for next season.”

The boys’ hockey Superfan jerseys are emerging to be as big of a tradition to BSM hockey as the sport itself. The rallying support and community that makes Benilde-St. Margaret’s so special translates over to all of its sports as well. BSM has a special place in the heart of the “State of Hockey.”