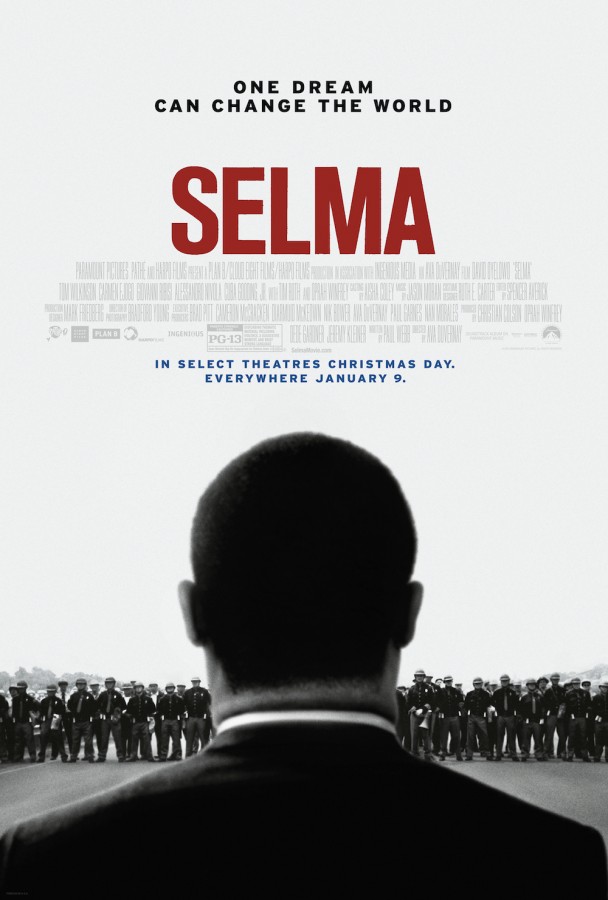 Ava DuVernay’s debut of directing a large-budget and large-scale movie was a dramatic success. Starring David Oyelowo as Dr. Martin Luther King Jr., Oprah Winfrey as Annie Lee Cooper, a woman who was denied the right to vote numerous times in Selma, and rapper Common who played James Bevel in addition to co-producing the movie’s hit track, “Glory,” with John Legend, singer of the hit song “All of Me”.

The film inserts us just before Martin Luther King Jr. and the group he led, the Southern Christian Leadership Conference (SCLC), decides to make Selma, Alabama the ground for protesting for voting rights. The SCLC incites the local population at first, to make a march from Selma to Montgomery, Alabama. The first attempted march is about 600 protesters strong until met with police at the Edmund Pettus bridge at Selma city limits. The protesters are tear gassed and beaten with clubs and police batons back into Selma. The event unravels on national television, entering the homes of many horrified Americans of every race. King then puts out a call to all those who believe in his cause to join him in Selma to protest and march. The final march to Montgomery sees approximately 25,000 protesters join King in his efforts.

David Oyelowo gives a riveting, emotionally inspiring, and intimate performance as King. From the beginning of the movie in which Dr. and Mrs. King are having an intimate conversation, to the conversations that King has in the jail cell, and the speeches he gives in front of the crowds, Oyelowo provides an exemplary portrayal of the late Dr. King.

DuVernay’s directing style brings the narrative to life and dives deep into the depths of nitty and gritty to describe the emotional scenes in Selma. Scenes such as the dramatic, slow-motion take down of Annie Lee Cooper on the Edmund Pettus bridge, the bridge beat-down scene, and the scenes in which police officers attack protesters at night emphasize how brutal the path to voting was for African-Americans during this time.
“Selma” gains power from Martin Luther King Jr.’s story, but the film does not detract from the fact that America still has a lot to accomplish and a long road to travel to achieve the true dreams of King.