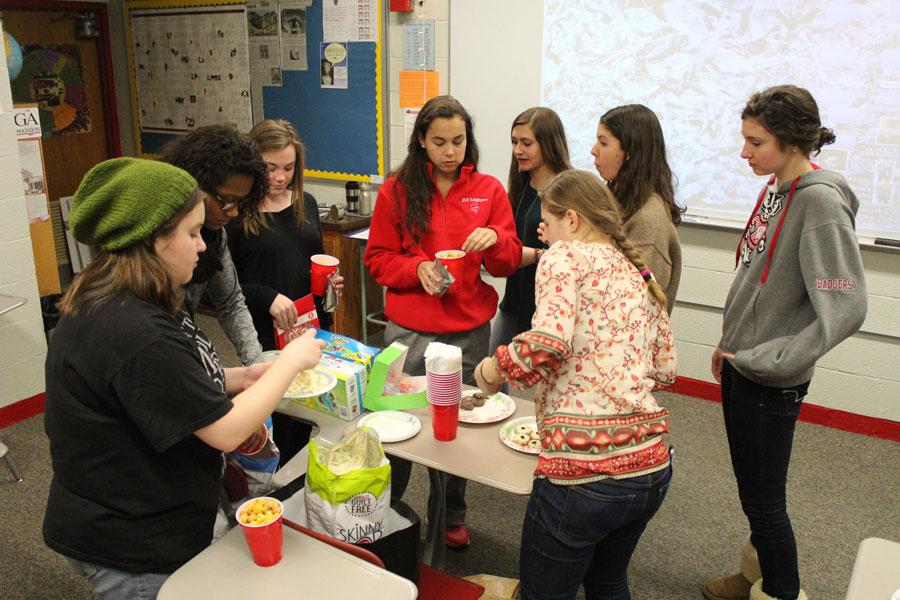 Members of the Classics Club enjoyed snacks before watching a historical, animated movie.

The BSM Classics Club fosters research and exploration of ancient cultures through Greco and Roman-based activities. The Classics Club was established several years ago, but it remained dormant until juniors Sarah Krieger, Emily Anderson, and Emma Sather revived it. “It has been a club for a while, but it’s been in remission for a couple of years. Actually, the club was just a Facebook group until we had started it again,” Krieger said.

The leaders set out to create activities that were close to the happenings of Roman and Greek people. “When the club first started, the seniors who ran it had awesome activities planned. They had a huge Olympic Game Tournament during the winter. They planned games that were as close to the Olympic games as possible,” Sather said.

The three students were participants in the club as underclassmen and eager Latin students. During their Latin class, they learned about the cultures of both ancient Greece and Rome. “Mr. Epler, the Latin teacher, had talked about reviving the club during class. He knew that we are committed to taking Latin, so he thought we should be the kids to start the club again,” Anderson said.

The students then began reigniting the club. “There’s about thirty kids in the club, so there is room to grow,” Krieger said. The club is open to all senior high students.

This year, the three leaders have thought of fun, relaxed activities that relate to the life of the early civilizations. “This year for one of our events, we watched Hercules in a classroom and ate Greek snacks,” Krieger said. Looking toward the future, the leaders have planned to create an event where the students can go “chariot racing,” or sledding.

Classics Club participants are known for their love of ancient civilizations, but the club is also recognized for how relaxed it is. In the Classics Club, students are not reprimanded for absences. “This club is really laid back, so kids don’t get into trouble if they miss a meeting or anything,” Anderson said. In fact, the club does not even have weekly meetings or practices. “There’s no weekly meeting or practice. We usually only have an event a month,” Sather said.

Although the Classics Club is about ancient civilizations, it is fresh and new. Three history-loving juniors have brought the club out of remission and are ready to offer a fun, relaxing learning experience.