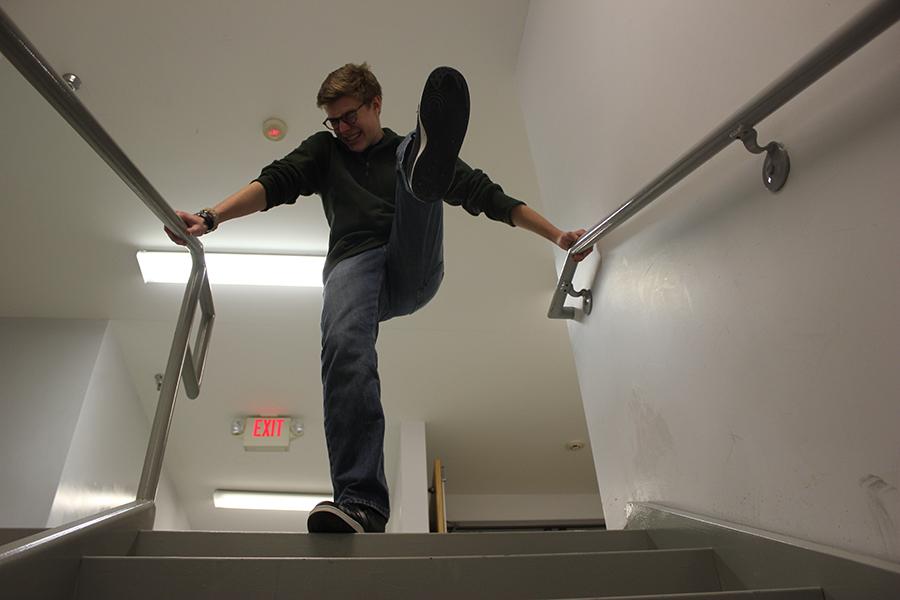 Junior Jimmy Youngblut is terrified of staircases, no matter how small.

“The only thing we have to fear, is fear itself.”- FDR. I don’t know about Roosevelt, but our country is afraid of too many things. Deep water, sharks, spiders, weird looking bugs, clowns, being chased, darkness, snakes, and high places, and the majority of these fears are simply illogical or, for lack of a better word, stupid. Being afraid is a natural thing, fear itself can motivate people to doing extreme or intense things. Instead of our fear of sharks or the boogeyman, we should be fearful of logical things like tripping, slug bugs, staircases, dark allies, and living itself.

Nothing is more terrifying than conducting a perfect faceplant in the middle of a congregated area. Feeling as though all time has stopped and everyone is silent, perfectly in sync for you to eat it in the hallway. This plague just exists in everyday life and is something that people are worrying about within their subconscious. Unlike a shark ripping off your leg in one of our many legs, tripping is a real phenomenon that exists to haunt the clumsy and foolish.

Another horrifying occurrence is the prospect of riding in a car with your friend and suddenly being clocked in the arm for the sole identification of a VW beetle. This particular fear is so terrifying because it can happen to any car rider in any car in our modern world. This infection now causes people to wear long sleeve shirts, and put foundation on their arms to cover the sad bruises caused by the ironically named “Love bug.”

Yet another fear striking the hearts of the population are the dreaded Public Staircases. Few things are more terrifying the numerous steps that accompany the monster of multiple floors. An extreme amount of effort is exerted when climbing the traitorous stairs all the while knowing that every single person is watching you with the eyes of an eagle, waiting for you to inevitably fall flat on your face or even worse collapse all the way back down thus requiring you to climb the stairs once again. Few people can even bear to muster the courage to re-climb these dangerous stairs, and fewer still will attempt them when an elevator is offered as a friendly alternative, and for logical reasons. The fear of stairs is a real fear.

But perhaps the most detrimental fear of all is the fear of living. More people die of living every day than of anything else. The key to not live, is to totally withdraw yourself from the human experience and go through life without actually experiencing it. This method can increase your life expectancy and in the end, make you a happier person. Anyone that moves is at risk of dying from the fatal disease known only as “living.” Be ever watchful, this condition exists every day, in all walks of life, and around every possible corner.