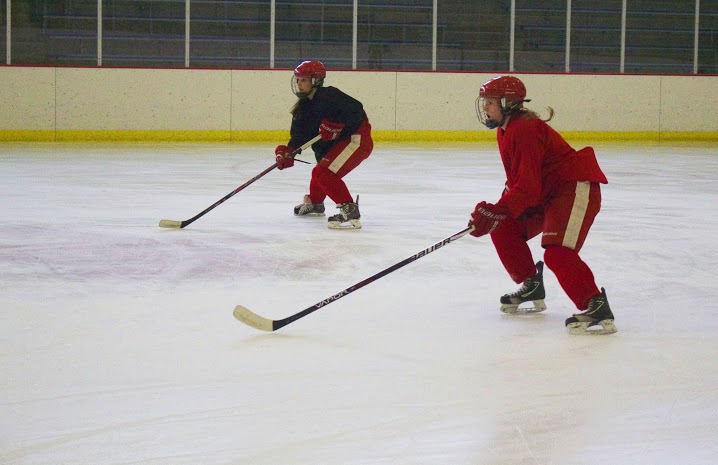 Two defensemen at work in their first practice of the season, preparing for the long road to the State tournament.

The BSM girls’ hockey team is lacing up for another hopeful season, looking to use their young talent to skate their way to the state tournament again but win a state championship, especially in positions that were previously filled by last year’s seniors. “This year is definitely going to be different. What I think we’re going to focus on is outworking other teams,” senior captain Xandi Swedberg said.

The team will be without several standout players from last year––including Kelly Pannek, Caitlin Reilly, Brittany Wheeler, Kaylee Druk, and Ali Praus––all of whom are now playing Division I college hockey. With the loss of key players, working hard day in and day out will be of paramount importance to the team’s success. “This year is going to require an 110% effort from everyone on the team, if we want to make it back to the Excel Center this year. It’s going to be a battle, but we can do it,” senior captain Maggie Conry said.

This is the first year that the team will play in the new Metro West conference, which consists of St. Louis Park, Chanhassen, Chaska, Bloomington Jefferson, and Bloomington Kennedy. In addition to joining a new conference, the team will face Holy Family, Holy Angels, and hockey powerhouse Eden Prairie twice during the regular season. “It’s a very tough schedule, but I have total faith in everyone on our team and I believe that we will play well throughout the season,” Swedberg said. “I’m optimistic that through our hard work we’ll be able to prove a lot of people who are not expecting anything wrong.”