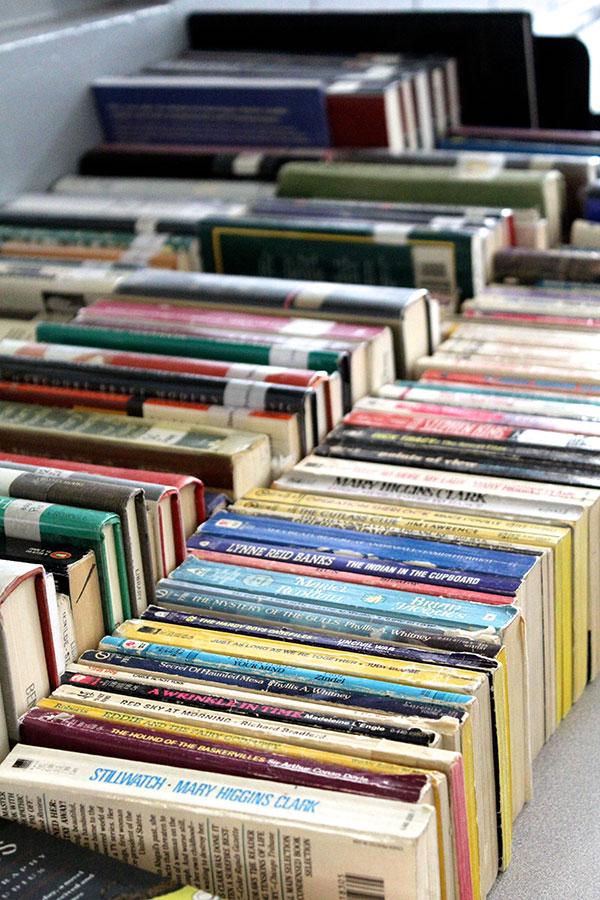 The school library received a makeover treatment this year, birthing a fresh and attractive "library" feel with book rentals and a large variety of new and popular reads.

As of this year, the Moore library finally offers real books for students. The library’s content has grown exponentially since its premiere — now filling up two shelving racks. School Librarian Mrs. Laura Sylvester hopes to expand the library in physical and online forms to fit both pleasure and curriculum. To navigate this new addition, here are Sylvester’s top picks for each growing category:

Centered around teen Doug Swieteck, “Okay For Now” is a coming of age story about the young characters dealing with hardships. The novel’s central themes are abuse, loss, and recovery. “I thought it was one of the better books I’ve ever read. It deals with some difficult themes like abuse, and just gives a lot of emotion,” said Sylvester.

Adventure: “The Raft” by S.A. Bodeen

“The Raft” follows Robie, a teenage girl traveling alone whose flight has crashed in the pacific ocean. Robie narrates her story of survival against shark attacks and persevering without water or food. “This book is about a girl who is stranded in the middle of the ocean, and just chronicles her survival. It’s supposed to be very good,” said Sylvester.

The first book of “The Raven Cycle Trilogy”, “The Raven Boys” tells the story of Blue Sargent, daughter of a clairvoyant, who has been warned that she will cause the death of her true love. When Blue falls into league with the nicknamed Raven Boys, she believes one of the members, Gansey, will be her true love. “This book has gotten great reviews, and it’s good for boys and girls. It takes place in a modern setting with lots of mythical twists,” said Sylvester.

Romance: “The Fault in Our Stars” by John Green

A New York Times best selling novel, “The Fault in Our Stars” details the budding romance of Hazel Grace Lancaster and Augustus Waters, both of whom have suffered the effects of cancer. The novel’s heavy topic of death and cancer is lightened with the humorous scenes, but it isn’t just a romantic walk in the park read. “People really like this one,” said Sylvester.

The main character Cia Vale has been selected to compete for a spot in rebuilding society after a devastating war. If she wins, she’ll be a part of the elite group tasked with running the United Commonwealth and ensuring its safety. Throughout the competition, Cia must learn whether it is better to trust no one or love uncertainly. “Our book club read, and they liked it. It’s sort of like the ‘Hunger Games,”’ said Sylvester.

Non-Fiction: “Boys in the Boat” by Daniel James Brown

Centered around Joe Rantz, this real life novel illustrates the story of the University of Washington’s 1936 eight-oar crew. The novel follows their journey from an unassuming team to the top of the competition. Mr. Daniel James Brown seeks to tell the story of the team’s commitment, determination, and optimism, all necessary to accomplish a goal. “Boys in the Boat is about a college rowing team that I think eventually go to the Olympics. It covers a lot in the history of the time, like the Dust Bowl, the Depression, what was happening in Europe and the war. It reads very quickly, too,” said Sylvester.