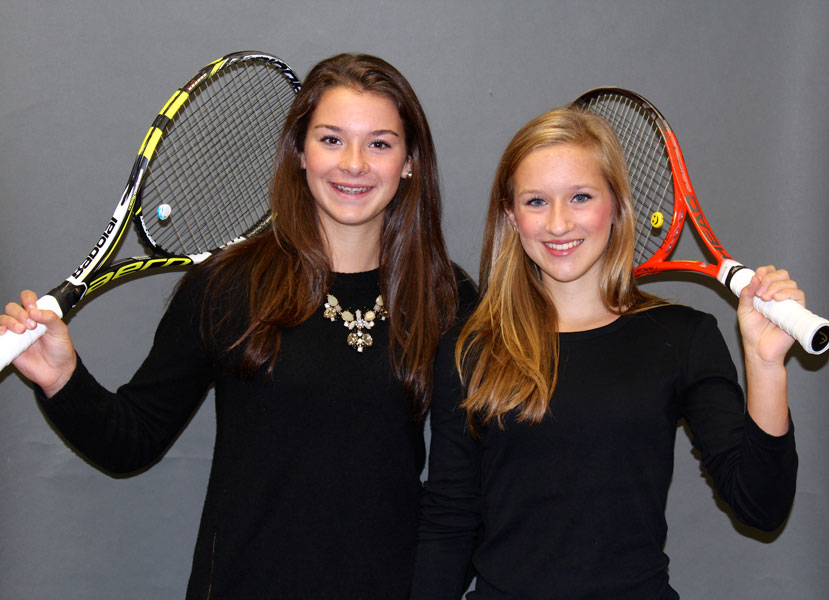 The McLeods started playing tennis when they were five years old and haven’t stopped since.

Junior captains Paige and Taylor McLeod, otherwise known as the Serena and Venus Williams of BSM, have used their ten plus years of intense training to take home second place in the State Tournament on October 24.

The McLeods started playing tennis when they were five years old and haven’t stopped since. “We practice and train with our coaches at the Baseline Tennis Center and do tournaments on the weekends. We play at least four times a week,” Taylor said.

Since seventh grade, Paige and Taylor McLeod have competed on the girls’ varsity tennis team and have led BSM as captains since ninth grade. The twins love playing as Red Knights because of the supporting and uplifting tennis community. “We all come together and support each other. You feel so supported by your team,” Taylor said. Paige especially loves the enjoyable atmosphere the team brings. “We’re always happy when we’re together, and we always cheer for each other,” Paige said.

While the twins love playing with teammates outside of their sisterly bond, playing together is especially fun for them. “We’ve been practicing our whole life together. We have a great chemistry when we play doubles and we trust each other,” Taylor said.

The sisters always support each other during tough matches and play off their strengths and weaknesses. “It’s so much fun to be out there because we can make each other laugh if we’re nervous. We know each other’s game so well, and we can use that to our advantage,” Paige said.

The strong chemistry between McLeod twins and their talent does not go unnoticed by the team. “It was really fun to watch them play doubles together and see how amazing of a team they are,” junior teammate, Elly Amighi said.

Paige and Taylor clearly used this advantage when they earned second place in their section after beating Columbia Heights, Cooper, and powerhouse Edina, which qualified them for the state tournament. “We put so much work into preparing for it, and getting through sections was a really big part for us. We beat Edina, [which was] one of the top teams. In order to get through sections we had to beat them. We played a close match, and we made it to state,” Taylor said.

After qualifying for the state tournament, Paige and Taylor beat Coon Rapids, St. Cloud Tech, and Eastview. The McLeod’s made it to the state championship game and took second place to Blake. Although the twins weren’t able to clinch their last game, they were proud of the results and appreciated the opportunity to participate in the state tournament. “It was just the thrill of being there and how exciting it was. There was so much support from everyone, like our team, parents, friends, and coaches,” Taylor said.

“We played relaxed for our games and just really wanted to have fun. During the state final, every point we won, our coaches would just start jumping. Their energy contributed to our energy, and it made it so fun,” Paige said.

The McLeod twins had an amazing season, and their success on the court not only comes from talent and determination, but also from their passion for the sport. “I just love the sport. I like competing and getting feedback to improve my game [to get] better on the court. It’s so fun; I would play every day if I could,” Paige said.