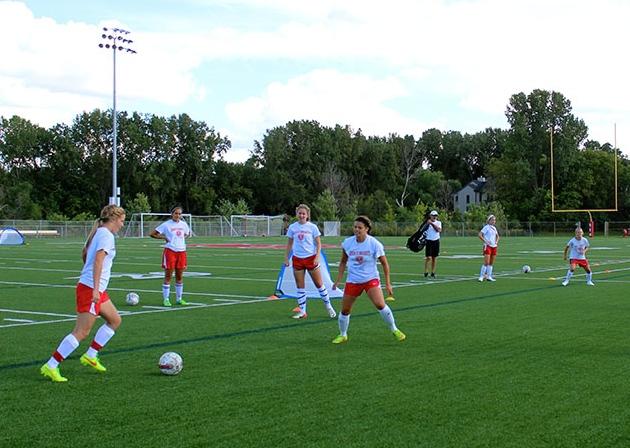 Barger looks to pass the ball to a teammate during a practice drill.

The Benilde-St. Margaret’s girls’ soccer team ended their season on Tuesday, October 14 in the section finals against a formidable Orono team whom the Red Knights had already faced earlier in the season losing 1-0. Throughout the season senior captain Anna Barger had been a steadfast presence in the center of defense of the team only allowing ten goals during the season. In the section finals Barger continued to impress in the backline allowing no goals from regular play with the lone Orono goal coming from a free kick. When the game went to penalties Barger calmly placed her shot passed the Spartan goalkeeper as the Red Knights bowed out of the tournament. Later that week, she was awarded the All-State first team award while being named a Ms. Soccer finalist by the Minnesota State High School League. Because of her lockdown defense and constant leadership throughout the season she has been rightfully named BSM Athlete of the Week for October 13-October 19.