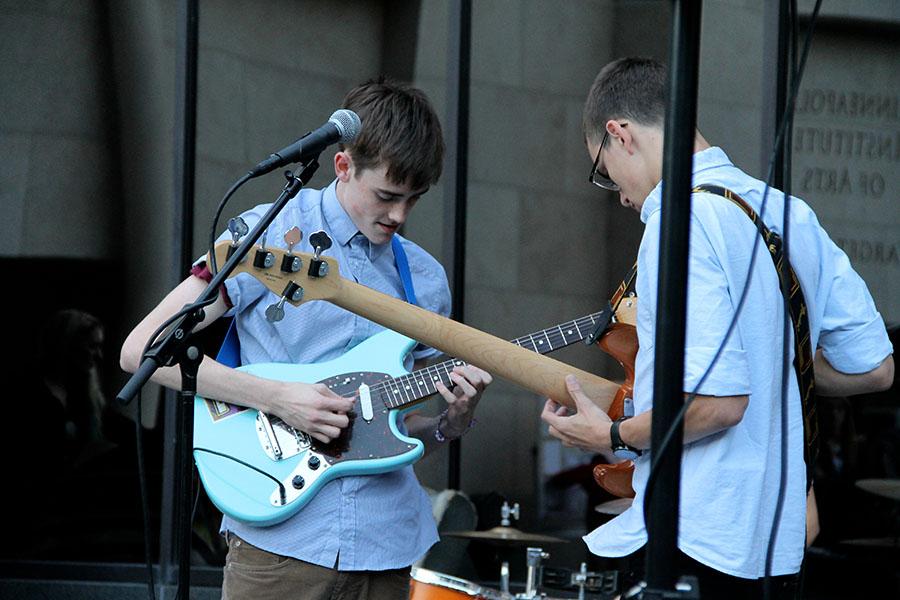 Hippo Campus is accumulating fans as they perform shows around the metro area and get radio airplay on their singles.

In the midst of the active Twin Cities music scene, a group of teens from the band Hippo Campus have stood out amongst the rest. They possess a unique sound, trademarked by flashy guitar riffs and powerful vocals.

In a chat with Espo, Hippo Campus’s bass player, the inter-workings of the band was revealed. The group was formed when the two rock bands separated during their high school years. They collectively worked towards writing tracks that would appeal to a wide range of listeners. Within only a few months, the band had crafted enough songs to pass as full album, but the project, unfortunately, was abandoned. “We had all of the songs to record an album but we didn’t feel we had enough buzz to release one yet,” Espo said.

With a heavy desire to gain more popularity, Hippo Campus went straight back to the drawing board. As the band cranked out new hits, the group chose to release their single “Little Grace.” Word of the new hit quickly spread through friends, social media, and even local radio. “We even sent the single to David Campbell on 89.3,” Espo said.

As Hippo Campus continued playing their small venue shows, a social tradition at the SPCPA (St. Paul Center for Performing Arts) carried the band and added to their growth. “Basically if your friend is in a band, you’re gonna go to their shows. And if you don’t go crazy at the concerts, then you’re not doing it right.” Espo said.

Venue owners watched as students from the academy crowded in to see the band. With no choice but to invite them back again, the band’s popularity grew naturally. Local radio station, 89.3, took ahold of the bands unique sound by not only playing it on a regular basis but forwarding it to MPR. “‘Little grace’ was put on MPR’S can’t stop playing list and some radio Iono based in Namibia, Africa picked it up.” Espo said.

In the past month they have played at various venues and attracted large audiences with no previous knowledge of the band. Playing at the Lake Harriet Bandshell for free provided wondrous coverage for the band, as the event was sponsored by vita.mn, a local arts event organizer in the Twin Cities. Recently, the band performed at the Minneapolis Institute of Arts Third Thursday of the Month night. The band exhausted all of their songs, with a lengthy hour and a half set, which is much longer than their usual fifty-minute set.

Last week Hippo Campus lined up a super-set: a sort of show playing mile-stone. The band played their biggest gig ever as part of the two-day Downtown Festival, and opened for the headliner, Future Islands, at the Skyway Theatre.

With every new show, Hippo Campus draws closer to releasing an album. Under the same management company as Minnesota band Trampled by Turtles, the band shows promise. Inexpensive gigs all over the Twin Cities make it hard to find a better time to go to a show. If the band plays their cards right, they could soon be making headlines similar to Howler and The Replacements.  Watch for the rise of Hippo Campus in the near future.