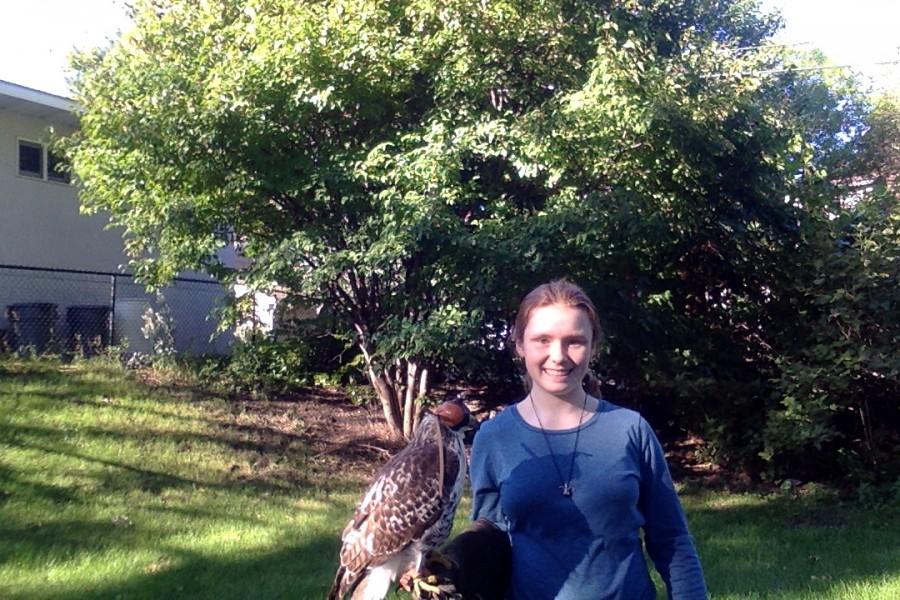 Sweeney has spent over two years working to become a permitted falconer.

A “falconer” is a prestigious title held by knowledgeable bird professionals at raptor centers, universities and zoos. Freshman, Spencer Sweeney has dedicated her time for two years to pursue her passion and join the ranks as a permitted trainer of birds of prey.

Sweeney’s falconing career began two years ago when she volunteered at the University of Minnesota Raptor Center and was moved by the grace and beauty of these large birds. The course to become a falconer, however, was a long and tedious process, especially for a twelve-year-old.

Sweeney had to work extremely hard to achieve the title of a permitted falconer. To obtain her permit, Sweeney met regularly with an experienced falconer to train and learn about falconing and finally pass a test. In addition, she read books on hawks and spent a lot of time at the raptor center, where she originally fell in love with birds of prey. “I spent two years researching, preparing, and learning to obtain a bird of my own,” Sweeney said.

All her preparation and hard work paid off earlier this September when Sweeney legally captured a red tailed hawk in Robbinsdale, Minnesota. She named her hawk Flynn, which is symbolic of their partnership. “The name I give him is for my benefit only, and he is still very much a wild animal,” Sweeney said.

Flynn lives in Sweeney’s backyard, and the two work together every day. Sweeney weighs her bird in the morning and after school, as his weight is very important and can vary throughout the day. A healthy weight for Flynn is about nine hundred grams or two pounds.

To properly care for her hawk, Sweeney uses a glove to protect herself and a hood to keep Flynn focused while training. Sweeney has invested upwards of two-thousand dollars in falconing. “Training birds of prey is a lot of work, and more than just a hobby, it’s a lifestyle,” Sweeney said.

Each afternoon, Sweeney works on drills with Flynn, such as teaching him to hop on her arm to feed. As a permitted falconer, she also hopes to hunt squirrels and rabbits with her hawk as soon as the end of October. “I am teaching him to eventually be able to hunt with me,” Sweeney said.

Sweeny has a special relationship with Flynn, but she recognizes that he is a wild animal and not her pet. If the hawk decides to fly away and not come back, that is his decision. “[Hawks] learn everything they need to know to survive in their first two months,” Sweeney said. And, because Sweeney captured him when he was about one year old, he will be completely functional in the wild.