KE compiled a list of benefits and disadvantages of sushi to dive deeper into this new trend. 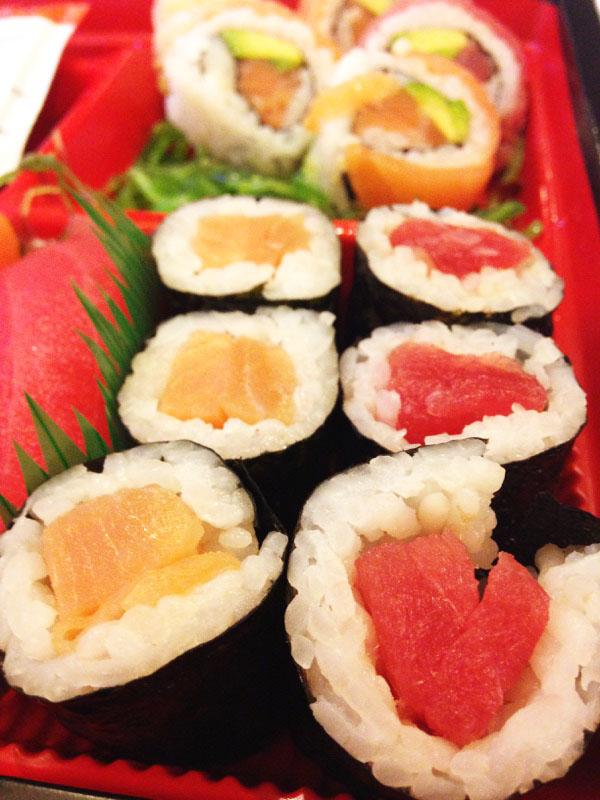 What could be better than a snack that’s tasty, quick, and fresh? Though all of these things may be true about sushi, there are some aspects that are often overlooked when determining the benefits. The Knight Errant took a closer look at the sushi trend and dissected its benefits and disadvantages.

Sashimi, a thin slice raw fish that is topped on sushi rice, carries a great deal of protein with limited calories. It is also beneficial for the heart because of its low content of saturated fats and cholesterol.

Sushi rice is usually made by cooking premium grade of Japanese short grain white rice. Some Japanese restaurants also use brown rice, which includes all of the nutrients lost during the process of making white rice. These nutrients include iron, vitamins B1, B3, and magnesium.

Nori, the seaweed wrapping the rice, consists of a plethora of health benefits. It contains  minerals and vitamins including A, C, and E. Plus, it is also very high in protein.

Uncooked fish leaves opportunities for parasites and bacteria to find their way in. Safe chefs will deep freeze the fish to kill the parasites and slow down the growth of bacteria until it is ready to be served. Raw fish such as tuna, shark, swordfish, and marlin may also contain high levels of mercury.

Knowing what is in the sushi, or any food,  is essential to deciding what is healthy and what isn’t. Sushi rolls such as Tempura rolls that are fried in batter can supply up to 500 calories, 20 grams of fat, and high amount of cholesterol.

Having a good sense of the vocabulary that is used at sushi restaurants will help for a better understanding of what is being served. The following are the most common types of rolls sold in restaurants:

Futomaki: Usually a specialty menu, Futomaki is thick and cut into eight pieces. This is the largest roll and usually contains four different ingredients. Being so big, it usually takes consumers 2-3 bites per piece.

Hosomaki: They tend to be simple rolls that only contain one filling. Perfectly bite sized, they are greats for snacks or light meals.

Uramaki: These rolls, nicknamed “the inside out roll”, are delicious but frustrating. Rather than the seaweed keeping the ingredients together, the rice is the outermost layer followed by the seaweed wrapped around the ingredients.  Without the seaweed holding it all together the roll is basically a mess waiting to happen.

Chumaki: These rolls are very similar in size to the hosomaki rolls but include more ingredients. They vary from 2-3 ingredients and are the most common roll found.

Temaki: These rolls are the odd ball of sushi types. Their look is much different from the others—having an ice cream cone shape in which the ingredients almost spill out of the top. Temaki rolls are also different because it is one entire roll, not cut into individual pieces.

The Knight Errant asked the visiting Japanese students from our sister school, Kaisei Gakuin,  about their favorite types of Sushi.

Yuki: Yuki’s favorite type of sushi is Ikura, which consists of an ingredient called Roe. Roe are fish eggs from shellfish, shrimp, scallops or sea urchins. The roe is first separated and soaked in soy sauce and Japanese rice wine to reduce the fishy flavor. Then, cucumber slices and quail eggs are added to neutralize the strong taste. It is finished off in seaweed and then enjoyed by many Japanese consumers.

Reina: Reina’s favorite type of sushi is  Magaro, which means “bluefin tuna” in Japanese. This specific type of tuna is the most common type of fish found in sushi but  is also served by itself. The tuna used to make this sushi is typically lean and is either blue or yellow.

The explosive trend of sushi lead to many misconceptions about the realities of it, so knowing what to order and the information about what is being served is very important.