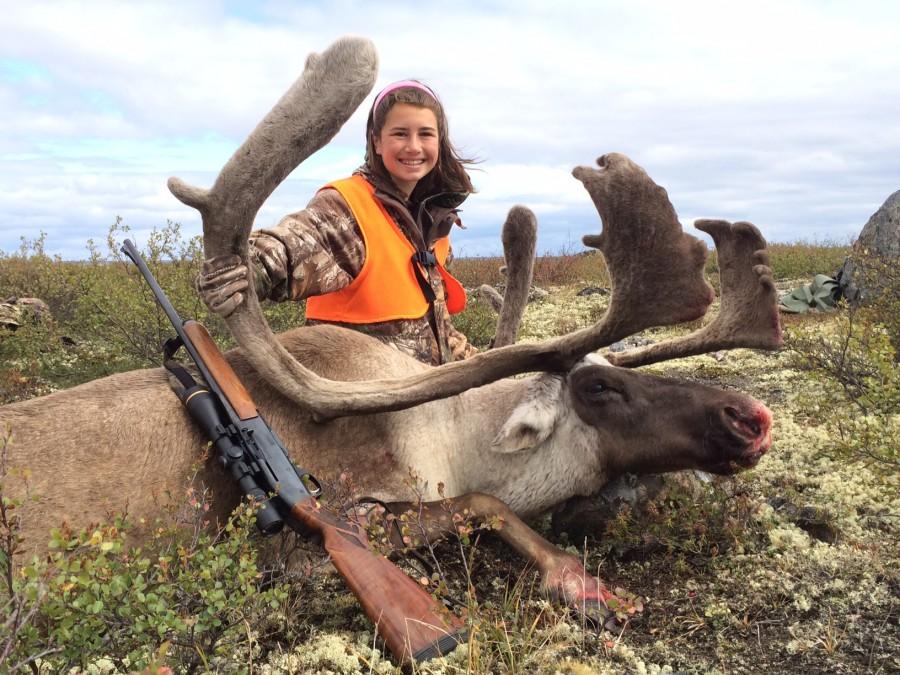 Canada can come across as an icy tundra that offers nothing more than funny accents, maple syrup, and circular bacon. However, Canadian summers are actually quite optimal for a variety of outdoor activities. Freshman Sarah Pucel took her vacation to a new extreme when she traveled to Quebec and decided to spend the last of her summer days on a caribou hunting trip.

Pucel gained her first hunting experience when she and her dad went turkey hunting in South Dakota last spring. After the trip, she wanted to pursue something bigger. Pucel and her dad wanted to explore all of their options and make sure they found the right place and time to embark on their new adventure. “After going to the game or sports fair, we went on the internet to search which place had the best areas for hunting caribou, and we found that Ungava Adventures had the best reviews, so we went there,” said Pucel.

Located in northern Quebec, the hunting spot Pucel, her dad, and her grandparents traveled looks straight out of a fairytale with its open skies, beautiful landscapes, and crystal waters. “The place was 50 miles from civilization, and the building we stayed in was a small upgrade from a fishing shack. Almost every place we went we traveled on the water on a sixteen-foot speedboat,” said Pucel.

The small residency didn’t bother Pucel; however, there were many more things to be excited about on the trip. “The food there was amazing. We would get up, eat breakfast, go hunting, eat lunch, and then go out again until seven at night when we would come back for dinner,” said Pucel.

The hunting experience, nevertheless, was by far the highlight of her trip––a thrill Pucel will never forget. She and her family spent almost the entirety of their days hunting, fishing and taking in the scenery around them. “We would go ptarmigan hunting, which is similar to pheasant hunting, in the morning, and then hunt the larger game at night, and there was also fishing we could do,” said Pucel.

Though she has hunted before, Pucel realized that caribou hunting is very different from hunting usual game, such as deer. “When you hunt a deer, you wait in a tree stand most of the time, and you usually shoot them at about fifty yards or less. When you hunt caribou you’ll see them from up to two miles away and often have to walk a long way to get to them because they don’t have as good of a sense of smell as deer, so they won’t always run if a person comes near,” said Pucel.

During her trip, Pucel also learned that hunting is not the same in every place. Her family saw a few grizzly bears but never had the opportunity to hunt them. In addition, she came across other wildlife that could not be shot at due to the area’s hunting regulations. “There were many foxes and wolves, but they don’t allow you to shoot them. The biggest animals you could shoot were grizzly bears, but there have even been polar bear sightings, which is really scary because polar bears are the only bears that will attack humans,” said Pucel.

After this unforgettable excursion, Pucel and her family look to plan more hunting trips and maybe even pursue some new forms of game. “I really, really, really liked the caribou hunt, but I can’t say for sure if I like it more than turkey hunting because that’s really fun, but I probably liked caribou hunting the most. I know I’m going deer hunting in the fall, turkey hunting in the spring, and we might be planning an elk hunt in Colorado next fall,” said Pucel.