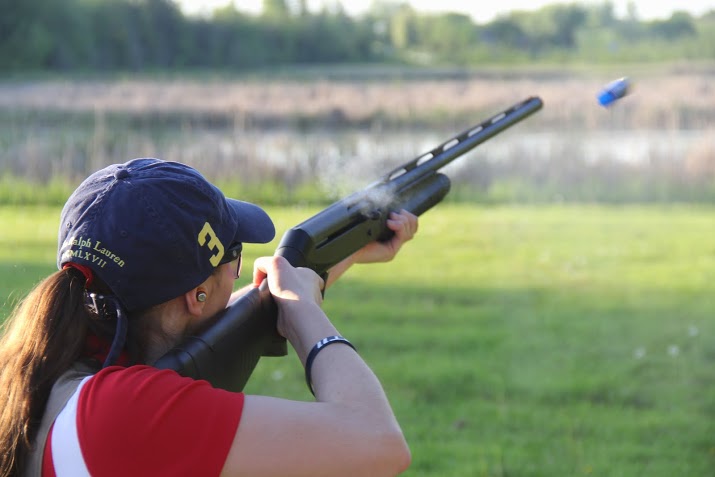 Athletes get five chances to hit their targets before switching spots on the stand.

Full of guns and exploding debris, the Benilde-St. Margaret’s clay target shooting club is like no other activity in the school. After only a year of existence, the club has increased its numbers drastically because of its adrenaline pumping nature and exciting competitions.

During a match, each athlete gets five shots before switching spots on a stand. There are 25 shots in a round, and each day the ultimate goal is to hit all 50 targets. “There will be someone sitting on a stand with a remote control button they push. The athlete says pull, and clay gets thrown to which they shoot. As soon at that clay has been shot either hit or missed, then the next athlete says pull,” head adviser Mr. Porisch said.

Each Wednesday the team members have a chance to practice at the Minnetonka Sportsmen Club, which is a private gun club with over 400 members that also holds competitions and records results. “We have five of six weeks of competition weeks where those scores count, and the averages are put together.” said Porisch.

In order to join the weapon yielding club, members must first go through rigorous safety procedures. Each member needs to have a Firearm Safety Certificate issued by the DNR. In addition, participants also need to participate in a field day, which informs participants on how to handle a gun properly as well as BSM’s rules and regulations. “Safety around guns is crucial to make sure no student or staff get hurt. Especially at school” Porisch said.

Senior Colleen Alexander has been a part of the team since its start last year. Although many people view guns as being dangerous and unsafe, and they can be. Alexander praises the precautionary measures of the sport. “I always think of it as a really good stress reliever. It takes your mind off of other things, and the team is really fun and really welcoming. They’re really keen on being safe. It’s a very safe sport,” said Alexander.

Students who don’t own a gun are still encouraged to join; the club provides guns and ammunitions. If you believe blowing up chunks of clay while they fly through the air could help you relieve stress, and also have a great time join BSM’s clay target shooting club.