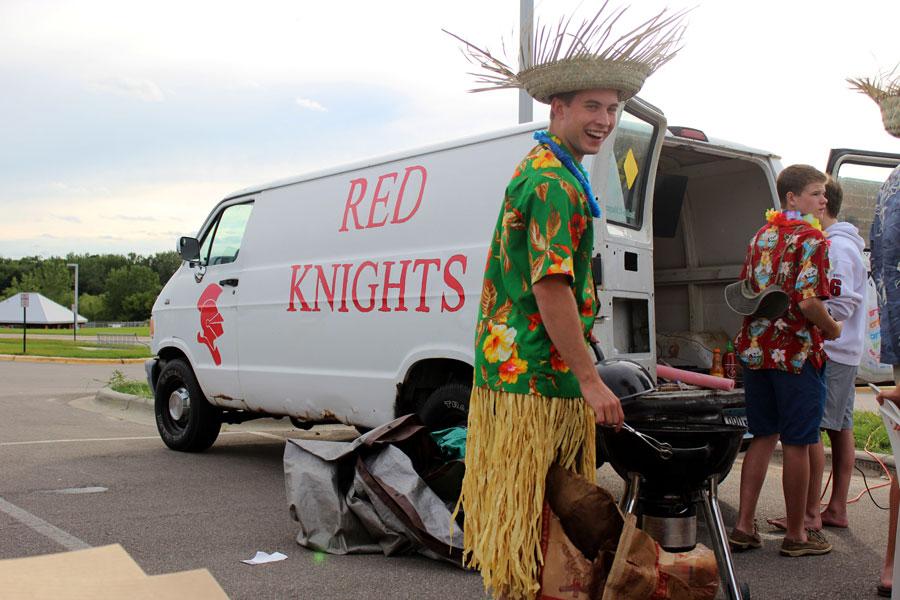 Senior Ben Newhouse leads the tailgate at the BSM vs. Chaska game, with the "Fan Van" in the background.

Hoping to expand and add excitement to pre-game tailgating at BSM sporting events, BSM senior Ben Newhouse has purchased a van to serve as the centerpiece of all tailgates. The van has quickly been dubbed “The Fan Van”.

The white van with a red knight head drawn on the side, can easily be found at all football games, home or away, and hopefully in the future, more Benilde-St. Margaret’s sporting events. “There’s a couch in there, a tv on the inside, an xbox and we have a bunch of chairs and speakers,” said Newhouse. The van was purchased by Newhouse’s family in August for $600 from a Craigslist ad in St. Paul and picked up shortly after.

“We found a bunch of stuff online and connected with this family [in St. Paul] and just got it from them. It’s my family mostly. We were the ones who bought it and a few BSM hockey guys painted it, and I basically did the rest of it,” said Newhouse. While options for advancement to the van are limited because of its nature, Newhouse hopes to add lights and a PA system in the next coming weeks.

Due to the early success of the van, this is hoped to be a tradition that can be carried on for years to come. “We want to make a key to pass down throughout the grades to keep it going and keep handing it down,” said Newhouse.

Newhouse has changed the tailgating experience for all BSM students and students all over the metro. Since the fan van has begun, students at other schools have shown interest in having a similar experience at their tailgating. “We’ve been able to bring a lot of different ideas to it. There’s been a couple of ideas to add to it and it makes a lot of people excited about potentially what we could do with the van,” said Newhouse.