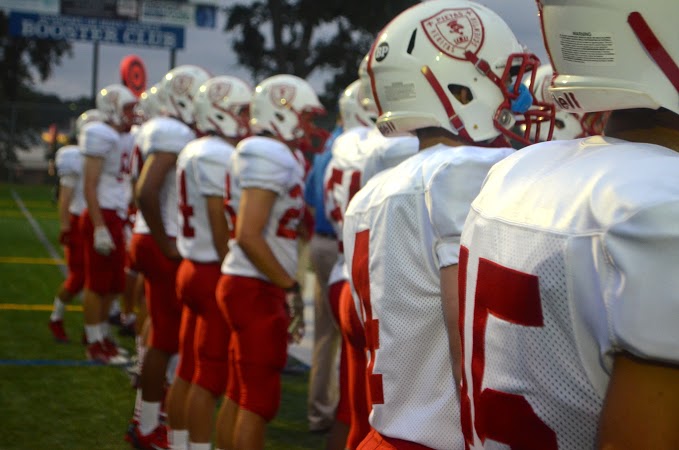 With only seconds left to play in the 2013 Section 6AAAA championship BSM senior quarterback Keaton Studrud took a snap, dropped back five yards and launched the ball into the end zone toward a sprinting senior Sam Lynch. As he stretched for the ball, the stadium went silent for a split second, followed by an uproar of celebration from the Islander’s players and fans along with the groans of BSM players’ as their season had ended.

The newly appointed senior captains Shea Maze, Jay Weber, Patric Rooney and Blaise Fitzgerald have all been apart of the program since sophomores, and this memory still hasn’t left them since that night. “Obviously it wasn’t fun losing to them last year, but we worked hard on the off-season and are looking forward to seeing if we can beat them this year,” said Rooney.

Although the team contains 26 seniors, the starting lineup is a relatively new one. With three returning offensive starters and four returning defensive starters, the returning players will have to get used to collaborating with new teammates. “Last year we graduated a lot of guys that played crucial roles on the team, but what was nice is that everybody had somebody to learn from in their position, so a lot of guys who had never really seen the field a lot before this year were ready to play,” Weber said.

With the absence of Studsrud, who currently plays for University of North Dakota, there are big shoes to fill. But, with senior quarterback Richmond Bowen stepping into the position, it’s clear that the Red Knight passing game is a force to be reckoned with. “Keaton put me in the right direction and it is always important to honor those before us and the legacy they left behind. Even though I am not a captain, I am a leader of the offense and everyone looks at you and I feel very proud of how I can encourage people,” Bowen said.

With a new conference come new opponents such as Chaska and Chanhassen who loom in the Red Knights’ path. However, BSM keeps DeLaSalle on their schedule in hopes of finally avenging last years’ defeat to the Islanders. “We all love the challenge of playing a harder schedule because it makes us better for sections. Also the games are a lot more fun and they are more competitive,” senior tight end Isaac Schmitz said.

Looking to the 2015 season, the Red Knights will have to rely on juniors Riley Simonetti, Cole Jacob, and Jameer Anderson along with sophomores Eric Wilson, Will Whitmore, Matthew Brooks and Ricky Floyd, as they will have lost the majority of the current roster. “We’ve got a small junior class, but they have plenty of kids who can end up playing a role on the team, I just hope that they learn as much as they can while they are in this position just like my classmates did,” Weber said.