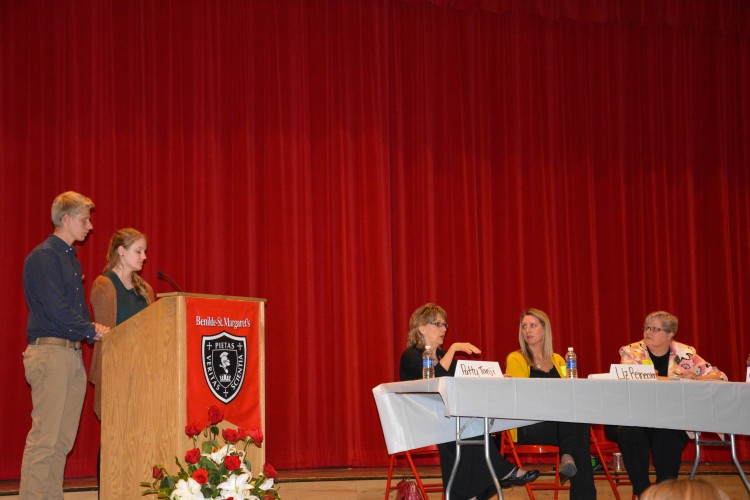 Advocates for pay equity speak on a panel in the BSM theater.

As spring began, a new club emerged at BSM.  The Justice Club, advocates for human rights issues in Minnesota, which “hop[es] to make changes in systems, and creating a lasting impact,” according to its Facebook page.

According to adviser Mr. Joel Loecken, students started the club after they attended the Justice Summit at Cretin Derham Hall, and they noted that most schools that attended had their own justice club, which motivated them to start one at BSM. And for the most part, the club is run by students. “My philosophy is it’s the student’s club. My job is to make sure adults in the building can give them support when they want it,” Loecken said.

The Justice Club also has two student co-chairs: Sarah Karels and Parker Breza. “Justice Club is a club devoted to changing systems in Minnesota, which means that we focus on human rights issues that cannot be solved directly through service, but need a more in-depth approach,” Breza said.

One of the first events Justice Club took part in was Relay for Life. BSM participated in the event in the past when they hosted their own but has been unable to in recent years. Fortunately, Cretin-Derham Hall offered a Relay for Life event on May 9 for Catholic Schools in the Twin Cities area, which allowed ten BSM students to participate in the event and contribute to raising almost $1,000.

For the last quarter of school, the Justice Club decided to support women’s equality in the workplace and pay equity. Yet controversial in society, the dignity of workers has always been an important issue, since the Catholic Church states that people deserve just compensation for their work. “If it’s true that women do make less money from the same jobs as men then it’s a justice issue, and that’s why the theology department wants to support this as we brought in experts from around the state to tell us what their experience has been and for everyone to hear their argument,” said Mr. Loecken.

After supporting the passage of a bill in the Minnesota State Legislature related to pay equity known as MNWESA, the club eagerly informed students about the topic. “The pay equity week is all about letting the school know about the issue, letting them know what they can do to get involved, and how to ultimately stop the problem,” said Breza.

Filled with many opportunities to get familiar with the topic, Pay Equity Week consisted of signature campaigns every day at lunch where there were optional engagements open to all students where students could come up to the Club’s table at any point during A, B, and C lunches to thank their legislators for supporting the bill in a letter to them or sign a petition for involvement on a national level. The panel featured three panelists: Ginger Hedstrom from the Sisters of St. Joseph, Liz Reinerston who founded a women’s equality program at Best Buy, and Patty Tanji the President at Pay Equity Coalition of Minnesota. There was also a documentary showing of Fourteen Women, and a discussion to follow.

Above all, the Justice Club aims to encourage students to stand up for what they believe is right. “I hope students feel empowered that their voices matter. That what they have to say makes a difference in our own school culture, but more importantly, it inspires adults to keep working for the right thing. It’s really good to see young people showing concern for our world,” Mr. Loecken said.