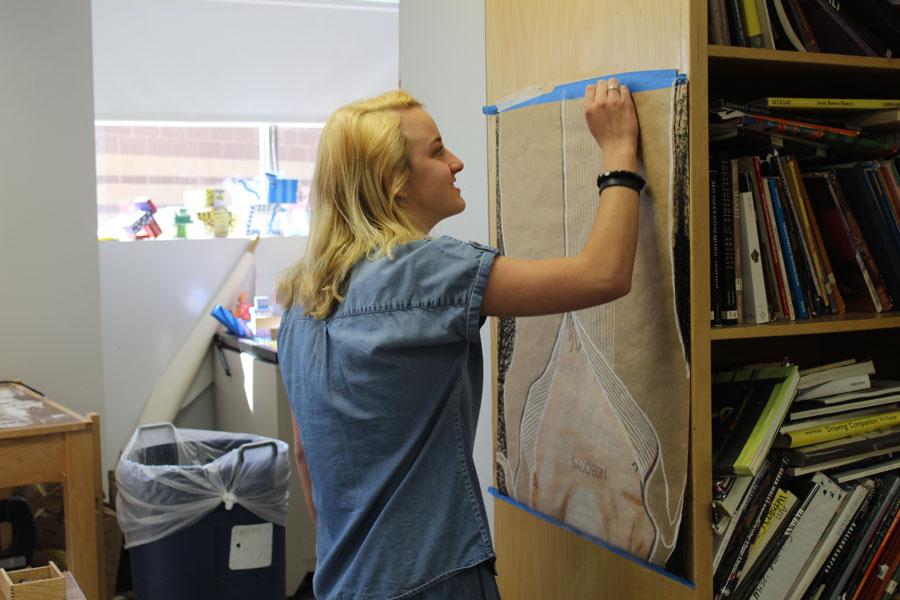 What first started as a hobby for junior Bailey Howard, who found her love for painting her sophomore year, quickly became something more junior year.

Ms. Leah Klister, Howard’s painting teacher, has watched Howard’s artwork mature and develop throughout the years. This year, Ms. Klister chose Howard as the recipient of the wet paint award, which shows appreciation to a BSM student artist. “[I chose her because] she challenges herself and comes up with ideas that are tricky and tries to figure them out. She cares about what she’s making,” Ms. Klister said.

She also has an appreciation for Howard’s use of mixed media that makes her work stand out amongst others. “This year she has experimented more with her work,” said Ms. Klister.

Howard enjoys creating an emotion on a canvas and being able to interpret pieces a different way than the artist intended. “There are no restrictions. I can make it my own,” said Howard.

Most of her paintings have a twist that makes them stand out. “Art is very personal and each person sees it differently. It’s awesome. It’s a book without words and people can read it however they want.” said Howard.

One of her favorite paintings is her Reflektor painting, because it reminds her of the Arcade Fire concert she attended. “I painted it through memory so I could add my own details that reminded me of the concert to it,” Howard said.

Howard recently signed with Bobiam, a youth artists company that represents artists under the age of 18. The organization offers young artists support and gets their name out to the world. “They put their designs on t-shirts, phone cases, and sell their paintings. The biggest thing is that they get exposure and get their work out.” Howard said. Bobiam, located in Uptown, has its own gallery where one can explore the paintings of young artists.

To get started on a painting, Howard listens to records––Arcade Fire, an indie rock band based in Canada, is her biggest inspiration––she then researches what she is going to create and makes a plan of action. “I’ve never been inspired without listening to music.” said Howard.

She uses mixed media on her paintings, through fabric, ribbon and other materials. “I don’t want to paint and imitate something; I want to create something that expresses me. I think it’s important for people to put themselves in their paintings.” Howard said. Howard’s work will be on display in Bobiam late summer and early fall.