When Civil War broke out in Somalia in the early 90s, much of the world watched in horror as one of the biggest humanitarian crisis unfolded before their eyes. With millions displaced, a lack of basic necessities, and diseases spreading rapidly, many wondered how something this devastating could happen so quickly.

In the aftermath, 400,000 people were displaced within their own country, and 300,000 more were displaced in neighboring countries and around the world. One such place that they sought refuge was in the United States––specifically Minnesota.

Many wonder why Minneapolis, Minnesota, one of the coldest places in the continental United States, would become home to over 30,000 individuals from Africa, but the answer is simple, Minnesota lives up to our “Minnesota Nice” standard. Churches and other social welfare services have played a significant role in allowing a war-stricken people to find safe refuge, by assisting in the complicated and red-tape filled process of resettlement.

Groups like Lutheran Social Services, Catholic Charities, and World Relief Minnesota are extremely active in their aid to refugees from around the world and helped to create a new place to call home. “The reason we came to Minnesota is not because of the weather,” Haji-Husein said, “but instead because the resources in the state make it possible.” 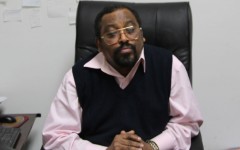 The reason we came to Minnesota is not because of the weather, but instead because the resources in the state make it possible.”

Unfortunately, many of the same organizations that helped the Somali community to resettle here are taking funding away from organizations like the Somali Benadiri Community of Minnesota, that are devoted to helping the community to prosper while living in the state. “Funding is very competitive, because the same organizations that are helping Somalis come over are competing for the funding we need to help them once they are here. And because they are a larger more well known organization, they will get the funding,” Haji-Husein said.

As the first Somali to come to Minnesota as a refugee of the war, Haji-Husein, who was a professor at the Somali National University in Mogadishu, became an integral part of the resettlement process. “I came first because of my background as an educator, as well as my ability to speak English well,” Haji-Husein said, “and many more followed.”

Haji-Husein felt it was his duty to make the extremely tedious process of resettlement easier for the Somali refugees seeking a new home in Minnesota, and as a result, began the Somali Benadiri Community of Minnesota. “I established the organization because it takes much longer than just a month to complete a resettlement,” Haji Husein said, “housing, jobs, education, healthcare, forms of identification, and welfare are all complicated and necessary elements of resettlement that isn’t explained in a brochure, which is why the organization exists––we are a bridge between Somalia and Minnesota.”

After the initial flood of immigrants, families followed and relocated from other states and countries, making Minnesota the largest Somali community outside of Somalia. Sadly, Somalia continues to be a country in the middle of a political crisis, meaning that somewhere around 50 Somali refugees are immigrating to Minnesota every month.