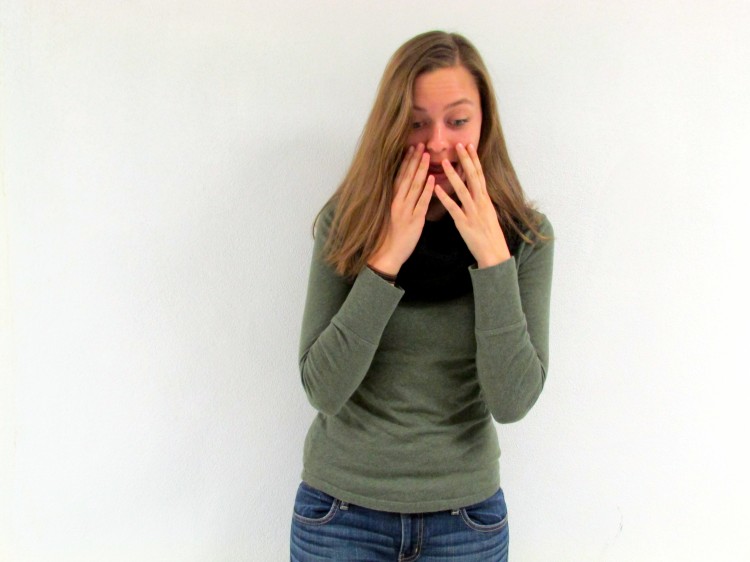 As a sacrifice for her beloved egg-child, Pirkl fiercely confronts creepy crawlers.

Rodents and creepy-crawlies alike found refuge in my house long before we moved in, eight years ago. I don’t know if my basement is the hottest hangout for things that go bump in the night or what, but I’m starting to feel like my third amendment right is being violated. I guess I should be thankful that the mice mainly keep to themselves, save for the slightly-unsettling late-night scurrying between the walls. The centipedes, however, have officially crossed the line.

It was around ten at night. I was about to go down to the basement in search of a small Easter basket which would eventually serve as a carrier for Olive Pearl. I wasn’t sure of said Easter basket’s exact coordinates, but I figured it wouldn’t be too hard to find.

My mom has always advised that we wear shoes in the basement due to its generally filthy circumstances, but I’m usually too lazy to take her advice. That night was no exception. I strolled eagerly down the vacuum-forsaken steps in my holey teal blue ankle socks, completely unaware of the catastrophe about to strike.

I had two steps left to descend when the foulest of beasts, also known as the centipede, darted across my path. I stifled a scream and ran halfway back up the stairs. What halted me in my tracks was my dedication to my single-celled spawn. If I couldn’t brave a one-inch-long centipede for my own flesh and blood, what kind of parent was I?

In a moment of either insane stupidity or honorable courage, I slowly crept down a couple steps and pulled out my phone to take a picture of the disgusting creature. I guess I felt the need to document the experience as a sign of my commitment towards my hard-boiled heir. Someday, whilst flipping through old selfies, I’d come across that picture and beam as I’d tell Olive about that fateful night with the centipede. Unfortunately, I was only willing to get so close to the vermin, and it scurried away before I could snap a clear picture.

At least it was gone; or so I thought. Still feeling a bit uneasy, I contemplated my next move while remaining on the second step. Obviously, that hundred-legged fiend was still out there, ready to strike at any moment. But it was still no excuse for parental neglect, so I took a deep breath and landed on the cold, concrete floor of the basement.

In this moment of frightening vulnerability, my unwelcome housemate decided to attack. And this time, he brought a friend. Not one, but two centipedes scurried menacingly across the basement floor. Outnumbered, my attempts to muffle my shrieks were in vain, and I raced up the stairs- taking four at a time (a personal record).

Although the atrocity of the centipede is a well-known fact, I knew it wouldn’t fly as an excuse for denying my child her basic human (er… egg…) right to shelter. I vowed to get that basket, but in order to do so, I would need to call in reinforcements. Namely, a shabby pair of pink polka dot rain boots and a flashlight.

Luckily for me, the Easter basket box was situated behind three metal shelving units, piled high with crates full of stuff we probably should’ve gotten rid of ages ago. Considering the fact that I had to move the first three shelves at least one foot away from the fourth (which held the coveted box), the two sentry centipedes from before would likely have time to go back to their base and notify the entire camp. I would have to move quickly.

I realized too late that I had made a potentially-fatal calculations error. Sure, there was enough room for me to fit between the shelves, but the crate? Forget it. Adjusting the shelves meant losing more time, but I had no other option. By now, the centipede army had surely mobilized; I could just imagine each spindly leg (and there would be hundreds), marching in unison. The thought only motivated me to pick up the pace (and vomit in a my mouth a bit).

Shuffling through the crate, I found that the baskets were coated with a layer of plastic easter eggs that soon rolled haphazardly across the basement floor (the centipedes wouldn’t see that coming). Finally, I found the one; the basket that would serve as the perfect nest for my omelette offspring. It even came furnished with plastic yellow grass. I seized it from the box, maneuvered my way across the basement, and bounded up the stairs.