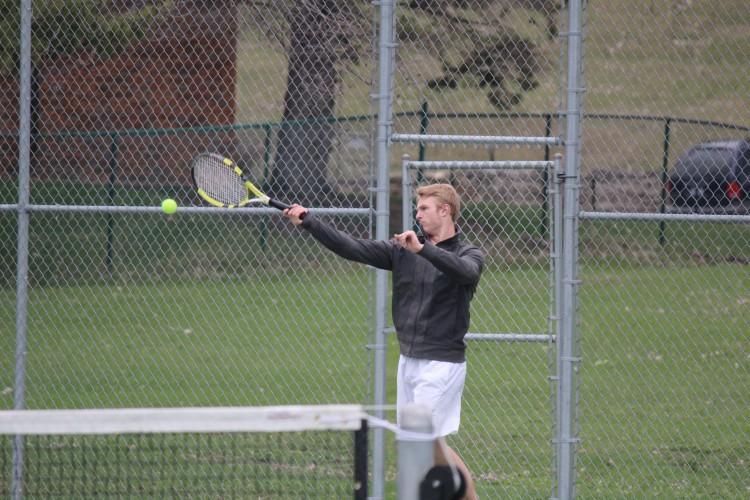 Peter Heimbold volleys during a mid-season match against Hopkins.

The Benilde-St. Margaret’s boys’ tennis team started the 2014 season in a favorable fashion with a record of 6-2, with five of their six wins coming at a score of 7-0 as of May 5. Their combined wealth of leadership and talent has led them to become a strong force on the high school tennis scene.

Having ended the 2013 season with an impressive season record of 11-2 the Red Knights hope to continue their success in the upcoming season. “We definitely have a team that can go far,” senior captain Will Jarvis said. “I’m just excited for an opportunity to prove ourselves.”

The team is confident that their hard work in the offseason will reflect well on their form. “The team has hugely improved since last year. We got a new freshman transfer from Providence and a lot of the guys on our team have been working hard during the offseason and have gotten a lot better,” senior captain Danny Hogan said.

The team has lofty ambitions for the 2014 season. After jumping off to a 5-0 conference record, the Red Knights would basically need to collapse to not win the conference title. “I expect that we will win the conference but our goal would be to win sections, which would take a lot of hard work,” senior captain Alex Moroz said.

Despite the ambitions of winning sections, a major obstacle looms in the Red Knights’ vision as they have intense competition in the form of the Wayzata Trojans, last year’s state champions. “I have really high expectations for the squad this year, we’d have to beat out the reigning state champion Wayzata in sections, but I still think we have a solid chance of making it to state,” junior Hank Paulson said.

The “solid chance” that Paulson speaks of is built around a strong core of skillful players along with the depth and gritty determination this years team possesses. “Being on a team as talented as ours has been a great experience; we all push ourselves to perform at our highest level, and we all understand our role on the team. Personally, I love the atmosphere of being on a team this deep, most of our matches aren’t too close, so we can have fun while we win,” Paulson said.

With five seniors, making up nearly half of the team, the leadership is in abundance. “It has been an interesting dynamic having so many upperclassmen on the team. We have a lot of people with the capability to lead the team which really helps to keep the team focused and intense during practices and matches,” Hogan said.

Along with the leadership on the court, this Red Knight tennis team credits much of their success to Coach Jamie Gaard Chapman. “Jaime has brought a lot of previous experience from her many years playing the sport and coaching other teams. Her all conference at Gustavus is evident in her work with the team,” Moroz said.

Although the year has just begun, it’s clear that BSM will have successful seassons in the sport. Looking past this season, a youthful, yet already quite experienced, team lies ahead. “BSM has a bright future in tennis. We have some solid players that are only sophomores and freshmen, I can’t wait to hear how they lead the team when I’m gone and see where they take it,” Moroz said.