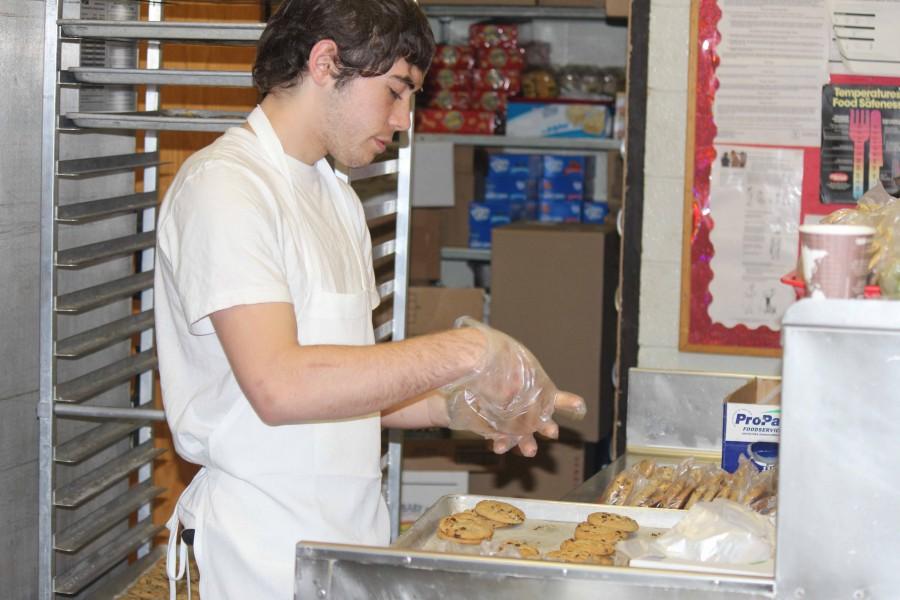 Junior Sam Lobash assists Taher with cookie production in the BSM kitchen. Lobash has also worked as a cook at several restaurants in the metro area, and he hopes to continue this work through the next several years to gain experience.

BSM junior Sam Lobash has developed an interest that sets him apart from many other high school students: cooking. Since November 2012, Lobash has worked jobs at several Twin Cities area restaurants––including a cook on the line.

Lobash’s passion for cooking, however, is not a new development. Rather, it began as a child when he experimented with food and tried to improve the food he ate. “I started to enjoy cooking when I realized if I didn’t like how something was made, I could probably make it better based on what I like to eat,” Lobash said.

Lobash’s family and other influences helped shaped his experimentation and love of cooking. “As a child, I usually watched family members who were cooking dinner and early on started cooking my own breakfasts, such as omelets, with different types of bacon, sausage, and other ingredients. I attentively watched my mother and grandmother, and I’ve also been inspired by Chef Raul at BSM,” Lobash said.

In November 2012, Lobash was hired to bus tables at Teresa’s Mexican Restaurant in Golden Valley. When the business was slow, Lobash sought extra time to advance his cooking career a bit further in the kitchen. “Sometimes, I would go into the kitchen to help the prep cooks for fun and to work on my Spanish,” Lobash said.

Then, in August of 2013, Lobash resigned from his position at Teresa’s and found employment at the Sunshine Factory in Plymouth, which is owned by Chef Andy Ortis. Even though he initially served as a dishwasher, Lobash quickly moved up through the ranks and became a line cook. “Overall, I enjoy being in the kitchen rather than working out front, bussing, waiting, or hosting,” Lobash said.

Lobash feels that Chef Ortis influenced and advanced his career greatly. “He gave me my first job as an actual cook and trained me in. I appreciate and am quite grateful for the opportunity he gave me. He always had a cheerful attitude and made sure the kitchen was in order and taught me the lesson that things need to be done right, and that it’s important to take the time to do things right. I feel very sorry for leaving so abruptly due to lack of transportation,” Lobash said.

Lobash continued to work the Sunshine Factory until March of 2014, when he was no longer able to obtain a ride to Plymouth. Nevertheless, the job gave him an opportunity for work hours as well as valuable experience and mentoring.

Lobash’s cooking career, in addition, was further strengthened by his mistakes. “One of my best experiences during cooking was when we had just relocated the Sunshine Factory and were extremely busy, as in over an hour plus wait time for tables. I was running the order wheel on the fryer station, and I made few if any mistakes, not to say we weren’t a little behind. Another time, before we relocated, I was cleaning the steam table but forgot to turn off the element, nearly overheating it. I never made that mistake again,” Lobash said.

The passion for cooking and food continues fascinate Lobash. “I like making dishes that I can create off the top of my head. I have no preference for what I cook with as long as the different ingredients go well together to bring out the natural flavors,” Lobash said.

At Lobash’s work, the hours vary with some shifts from morning to mid-afternoon, mid-afternoon to night, and, most preferred by Lobash, all day shifts. “You get a lot of hours, and you’re busy the whole time. You get to prepare for the day. It keeps it interesting,” Lobash said.

Currently, Lobash is seeking new employment as a cook for this upcoming summer and also has an internship at the Dakota Jazz Club. “I am hopeful that they like my work and give me some hours, even if I have to dishwash and work my way up again. I’m looking for full time work in another restaurant this summer. I really enjoy what I do,” Lobash said.