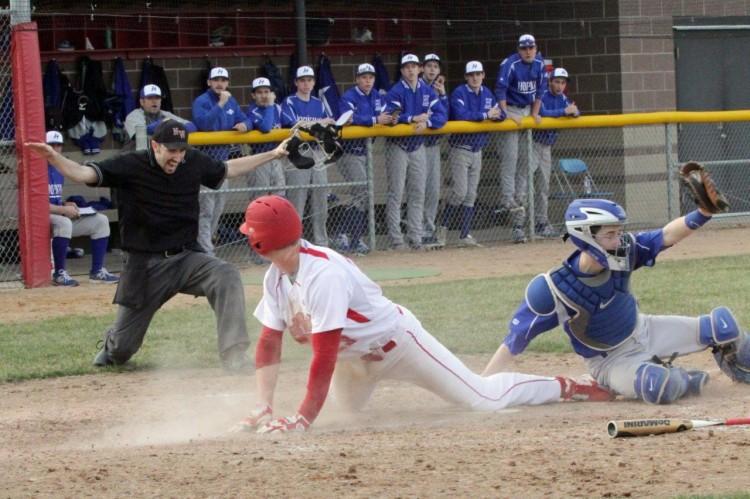 Senior Mikey McGIll scored the game-tying run in a thrilling 7-6 win over Hopkins.

At the start of the season, the Benilde-St. Margaret’s baseball team was only an honorable mention in the preseason polls. However, behind strong defense and winning their first 11 games, the Red Knights have climbed up the rankings and are looking to make a run to the state tournament.

Last season, the Red Knights ended their season with a section loss to Armstrong, but spent in the offseason working on honing their skills. “We all put in a lot of work during the offseason with Jake Mauer at Mauer Chevrolet. He is a great coach and helped all of us get a lot better,” senior captain Jimmy Cron said.

Heading into the season, the Red Knights now had a roster filled with 12 seniors, all entering at least their second year of varsity experience. but faced a difficult start to their schedule with Hopkins, Bloomington Jefferson, Totino-Grace, and Wayzata in their first eight games. The Red Knights were able to get wins over their toughest competition, including a dramatic 7-6 comeback against Hopkins, on their way to their undefeated start.

One of the main reasons for their undefeated start to the season is the pitching staff, led by senior aces Michael Kaminski and Jimmy Cron. Cron and Kaminski have combined for seven wins while only allowing 13 runs in their seven starts.

While the defense has held opposing offenses in check, the Red Knights have had one of the state’s best offenses. Senior captain Keaton Studsrud leads the team with 5 hits while Kaminski leads the team in RBIs with 10.

Entering this week, the Red Knights were ranked No. 3 in Class AAA, trailing only Lakeville North and Cretin Derham-Hall, but also the only remaining undefeated team in the state’s highest class. The Red Knights are scheduled to face Cretin on Saturday in a matchup between two of the state’s top baseball programs.

Although they have started the year better than any other team in program history, the team is still not taking any opponent lightly. “We’ve gotten through what we considered to the “difficult” part of our schedule, but we still have very challenging conference games against SLP and TG, both teams that have proven to be very talented. Also, with the depth of our conference, we cannot allow ourselves to overlook any teams,” Kaminski said.

“We just have to keep doing what we’ve been doing. It’s all about winning big, clutch games down the stretch and we definitely have guys who can handle the pressure. It’s a dream for all of us to make the state tourney,” St. Olaf commit Jimmy Cron said.