Boys lacrosse journeys back to the top 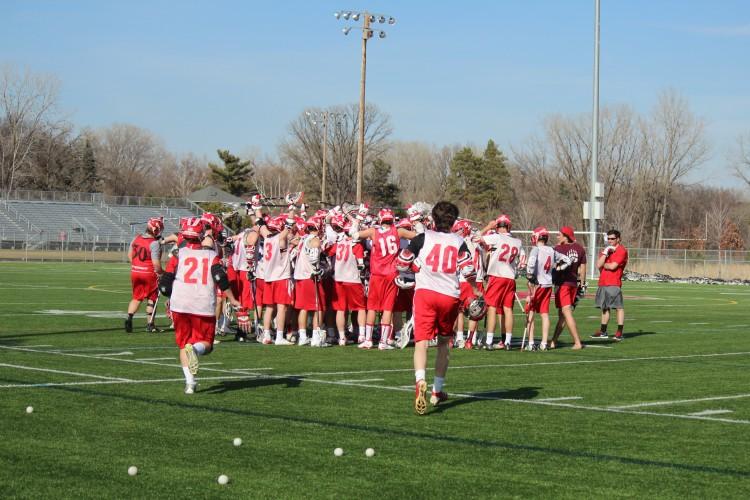 Since the MSHSL has recognized lacrosse as a official high school sport, the Red Knights have earned three state titles. However, they have not been to the state tournament since 2011 and were defeated by rival Blake in the Section 6 semifinal last year.

Ever since the MSHSL implemented the boys’ varsity lacrosse state tournament in 2007, the Red Knights’ have earned the title of state champion three different times.

Following their back to back championships in 2010 and 2011, the Benilde-St. Margaret’s boys’ lacrosse team appeared to have the genetic makeup of a lacrosse dynasty and most assumed that more championships would surely come in the ensuing seasons.

However, due to a series of injuries and unlucky bounces, BSM has found themselves on the losing side of the recent section tournament celebrations. This season the Benilde-St. Margaret’s boys’ lacrosse team looks to make their first state tournament appearance since 2011 and capture the school’s fourth state championship in the process.

On April 14, 2012, the Benilde-St. Margaret’s boys’ lacrosse team found themselves on the losing end of a game against the Eagan Wildcats in the early portion of the season. On the surface, it looked like any other loss on the schedule; but in reality the top-ranked Red Knights had lost much more than just the lacrosse game. In the second half of the game, BSM’s leading scorers and Mr. Lacrosse front runners Christian Horn and Will Hoesley both suffered season-ending injuries, significantly dampening the Red Knight’s hopes of a third consecutive state title. Despite a strong effort, the injuries proved to be a problem as BSM was eliminated in the section tournament. The loss began a state tournament drought that the members of the 2014 varsity team will look to end by advancing to the program’s first state tournament since 2011.

After finishing the 2013 regular season with a record of 8-4, Benilde-St. Margaret’s was bounced from the section 6 tournament, falling to the Blake Bears in the semi-finals. The Red Knights return 11 seniors to this year’s roster and will look to that leadership to avenge last season’s disappointment. “Losing to Blake last year definitely motivates us this year. They’re one of our most competitive rivals, so we want to get that back this year,” senior captain Mikey Lamb said.

With the teams 11 returning seniors, the Red Knights look to take advantage of the chemistry they have built over the last two seasons. “We play well together and we’re comfortable with each other because we’ve been playing as a group for a few years now, and I really it think it will benefit us,” Lamb said.

Despite the strong nucleus of returning players, the Red Knights will have some questions to sort out if they are to accomplish their goals. “We have a relatively inexperienced group of attackmen that we will need to step up and contribute. Also, Michael McClurg, Colin MacEachern and I will have some healthy competition in net before the coaches select the starting goalie,” senior goalie Jeremy Pastir said.

The Red Knights will be challenged early in the season, with four of their first six games coming against top ten ranked teams. The first few games of the season provide some excitement, as they know they have an opportunity for a variety of upsets. They look to take the challenging stretch one game at a time, starting with the first game of the season against top-ranked Eden Prairie. “They have some returning offensive players with a lot of talent, but they graduated a lot of talented defensemen. We have to capitalize on the inexperience of their defense,” Lamb said.

The combination of skill, leadership, and work ethic on the Red Knight’s roster has created some large expectations for the players on the team, leaving the program with an ‘all or nothing’ mentality. “The expectation is to win the state championship. We know that we have a lot of competition, but we feel we should be considered one of the top teams in the state,” Lamb said.