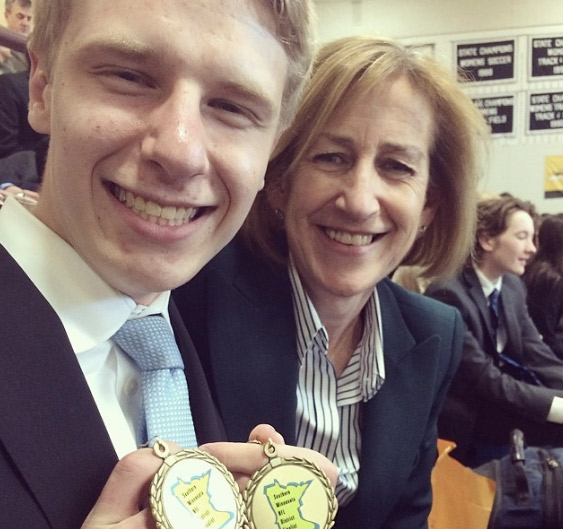 Of Breza's accomplishments, head coach of the speech team, Ms. Maura Brew said, "We could not be more proud of him."

When Chris McDonald, head of the Minnesota branch of the National Forensics League, announced the qualifiers for the national speech tournament, one BSM student could finally breathe easy; what he had been working for all season was finally his.

“In that moment, I was just really proud. It’s been my goal this season to make it to Nationals,” said junior Parker Breza.

Since his freshman year, Breza has been a member of BSM’s speech program, competing in the category of extemporaneous speaking. “In extemp, you draw three questions and then pick one to give a seven minute speech on, with thirty minutes of prep time; I like it because it’s always a new, fun challenge,” Breza said.

The NFL national tournament, held over the summer, is the pinnacle of competition in speech. With students from all of the country attending, an event’s top three competitors at each district’s qualifying tournament are invited to compete.

Qualifying is a long and grueling process. “After two full days and twelve rounds, I qualified in two categories, domestic [extemporaneous speaking] and international [extemporaneous speaking],” said Breza. When competing in domestic, Breza speaks on topics focusing on the United States, like rollout of the Affordable Care Act or what Obama should do in his final two years in office; in internal, he answers questions ranging from China’s economic growth to if independence is feasible for Scotland.

This summer, Breza will head to Kansas City, Kansas – this year’s location for the tournament – in order to compete with over 200 other extemporaneous speakers, but this is not Breza’s first brush with this sphere of competition. Breza and teammate alum Catherine Cole competed at last year’s nationals in Alabama. Last time however, Breza competed in domestic; this year he is planning on going in international.

“[Nationals last year] was an amazing experience that changed my perspective and pushed me to work incredibly hard all season, so I could return and be on the same level as the competition I saw there. This time around I hope to break top sixty while there,” said Breza.

Breza’s friend and teammate senior Anna McCloskey also had a successful weekend, becoming the first alternate in domestic extemporaneous speaking. “I’m extremely proud of Parker, to have his pick of international and domestic. He will face some tough competition, but I’m confident that he can hold his own with the best of them,” McCloskey said.

“The best part of the whole weekend was after I finished my last final round, and I knew throughout the past two days, I had given some of the best speeches in my speech career. It gave me the momentum I needed to know that I can do well at the national tournament this summer,” Breza said.