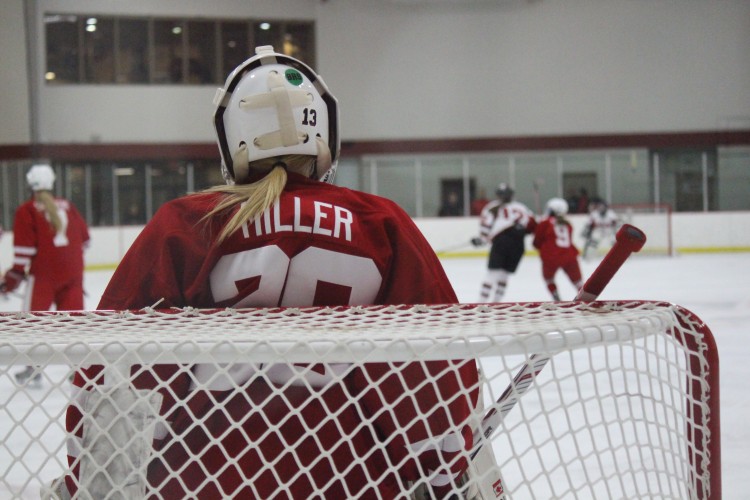 Senior goalie Abbey Miller, who holds the state record for shutouts, aims to help the Red Knights to their first state title in Class AA.

In the Class AA State Quarterfinal Benilde-St. Margaret’s Girls’ Hockey team squared off against the Roseau Rams. The first period began with heavy pressure from Roseau on the Red Knights forcing senior goaltender Abbey Miller into making some impressive saves. “Roseau came out pretty tough in the first period and we came out really flat. I just tried to focus on stopping the puck and staying calm,” Miller said.

When the second quarter began it was as if a new BSM team had stepped out onto the ice with wave after wave of Red Knight forwards bearing down on the Roseau net. It was only a matter of time before senior forward Caitlin Reilly opened the scoring and soon after that Pannek slotted home two of her own as BSM started to up the intensity level. Towards the end of a period heavily dominated by the Red Knights senior Kasi Petersen found the net with her first goal of the season.

“It was really exciting. I knew I had one coming, I just didn’t know it would be the first game at the X. At the beginning, the nerves were definitely there in all of us, but after the first period, we were able to play more of our game and take control of the play,” Petersen said.

The third period began as the second had ended: dominating play from the Red Knights. The team was able to relax knowing they had the win in the bag, which made for some open flowing hockey as BSM added three more to the scoreline, one of which, was another Pannek snipe, completing her hat-trick. A goal from senior captain Ali Praus rounded the game off in what was a 7-0 rout of their Roseau opponents.

“It’s surreal to be in the semi final for state. As a team I know a few of us have dreamt about being in the state tourney for a while. It’s great to be here as a unit. The team and I have worked so hard this year and have had to overcome past failures to get where we are,” Praus said.

The Red Knights are set to face Lakeville North at the Excel Energy Center for the State Class AA semifinal for a place in the championship match.