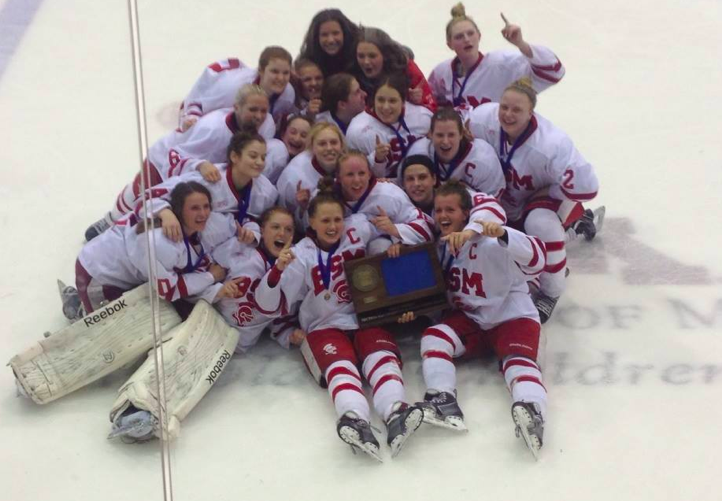 When the third period expired last Friday at Ridder Ice Arena, the Benilde-St. Margaret’s girls’ hockey team poured off the bench to celebrate their first section championship since 2008. With the victory, the Red Knights earned a berth in the state tournament where they will face the Roseau Rams in their opening game.

As the Red Knights received their section 6AA championship medals it was more than just a victory for many of the seniors, it was a well-deserved validation of the hard work and sacrifice that the Benilde-St. Margaret’s girls’ hockey team endured over the past few season. Despite the many playoff let downs the past three years, 2014 proved to be the Red Knights’ year for redemption as they powered through the state’s best section to earn a spot in the Class AA State Tournament. Seniors Caitlin Reilly and Kelly Pannek led the way with 25 combined points in section play while receiving outstanding goaltending play from senior Abbey Miller.

Looking forward, the Red Knights will take the ice Xcel Energy Center in St. Paul to face Roseau in the quarter final game of the AA state tournament. The Red Knights, who received the number 1 seed in the tournament, will enter thursday’s game with a record of 25-2-1. The Rams, who won the section 8AA title, hold a record of 16-12. The winner of the game will play on Friday night in the state semifinal against the either Lakeville North or Mounds View.