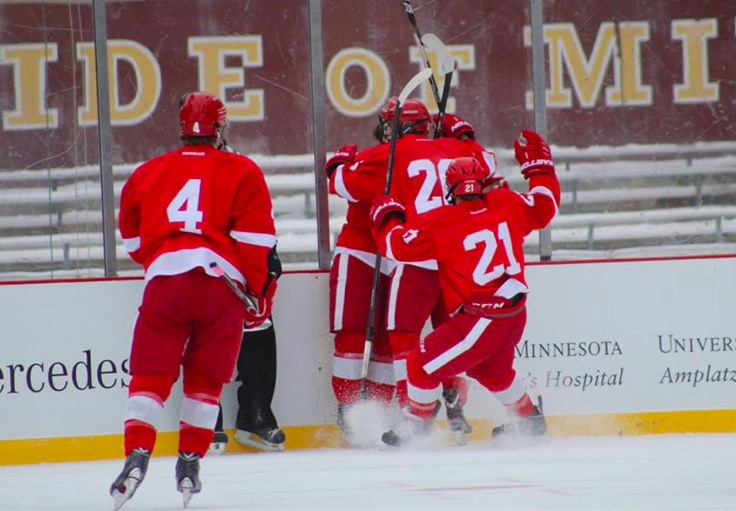 Section 6AA has been a perennial powerhouse in the State of Hockey, often deemed the ‘mini-state tournament,’ as many of Minnesota’s consistently staunch hockey programs battle it out just to make it to the Xcel Energy Center and the Class AA state tournament.

For the first time in years, the Benilde-St. Margaret’s boys’ hockey team isn’t ranked in the top-ten going into the section playoffs while rivals Wayzata and Eden Prairie are. The last two years in particular, BSM was heavily favored going into sections, in 2012 having the motivation from Jack Jablonski’s injury and in 2013 just because of pure firepower on offense.

This is certainly a new situation that this group of seniors will face as they’ve become accustomed to being on top, but as the state was shown in 2012, the right motivation can carry a team over any obstacle, and perhaps being the relative underdog this season will aid the Red Knights.

In the first round of sections, BSM will face Hopkins tonight, who only sports a 8-15-2 record, yet defeated Minnetonka twice, and tied Eden Prairie, two strong teams that the Red Knights struggled against in their rebuilding season.

With that said, number one seeded Wayzata should obliterate Robbinsdale Cooper which would set a semifinal rematch between the Red Knights and fourth-ranked Wayzata, if the Red Knights prevail over Hopkins. Though the Red Knights lost to the Trojans in their only meeting of the year, the game could easily have gone either way with the Red Knights hitting the post twice in the third period.

However, to make it past Hopkins and Wayzata and reach the section final, the Red Knights will have to make some very important adjustments. First, they have to cut down on penalties. The PK unit hasn’t been bad, but hasn’t been stellar either, and giving teams powerplays has hurt the team’s chances to win close games. Second, the Red Knights have had many of games where they had a number of chances on the offensive end, but were unable to capitalize on more of the opportunities given to them. The offense is clearly working and has options, as the scoring has been relatively spread around; but they must finish. Goaltending has had its ups-and-downs, but when starting goaltender Jalen Long is on his game, he’s reliable which was shown when he turned away 45 of 51 shots against Eden Prairie.

The  team may not include a trio of superstars like Besse, Labosky or Moore, but they are still a strong squad that are likely to be overlooked due to their record and ready to make a run to the state tournament