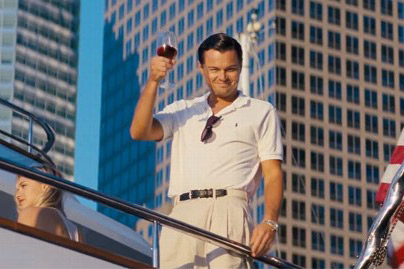 On the memoir…
A powerful narrative that fully exposes the darker facets of Wall Street culture and the brokers who make it work, “The Wolf of Wall Street,” dives to the ultimate depths of debauchery and reckless wealth that fully shocks the reader no matter how desensitized they may be. Written by white collar criminal extraordinaire Jordan Belfort, the reader will find a no-holds-barred look into the life of one of Wall Street’s most wanted con-man.

The novel centers itself around the now defunct penny-stock trading firm of Stratton Oakmont—the firm that Belfort founded and made millions with. Belfort and his partners practiced selling stock in companies that, on a fundamental business level, were flawed and worthless by tricking investors into believing that the shares were genuinely valuable.

Drugs, prostitutes, bribery, and wholesale corruption dominate the novel. “The Wolf of Wall Street” is interesting and engaging but becomes repetitive, as the enormous shock value of the opening pages quickly diminishes while the debauchery deepens, leaving the reader simply amazed that any one person could live so terribly and survive.

Quite contrary to the movie, the book does have a hint of a cautionary tale to it. Belfort expresses his regret and surprise at his former lifestyle and the things that he believes money led him to do. Overall, Belfort proves himself to be as good of a writer as he is con-man, and while his writing style does seem odd and segmented at times, “The Wolf of Wall Street” remains engaging and provoking from start to finish.

On the movie…
For fans of non-stop 80’s style, and completely out of control partying,“The Wolf of Wall Street” is the perfect depiction. Leonardo DiCaprio stars as the inexplicably rich Jordan Belfort, who wanting to have a good time, eventually ends up in a world of trouble. This is not a flick to go see with parents, or grandparents, or any relatives that are held in respectable esteem.

Looking past the drugs, raunchy scenes and violence, the cast of “The Wolf of Wall Street,” including Jonah Hill and Matthew McConaughey, does a fine job at bringing to life the depths of Wall Street’s depravity. Capitalist extraordinair and inventor of penny-stock brokering, Belfort unrepentantly climbs his way up amongst the ranks of famous businessmen in a matter of years, along with his self-started firm, Stratton Oakmont. The movie, although lightly, touches on the darker moments of Belfort’s past such as divorce, death, and domestic abuse. However, it’s mostly one big party.

Dicaprio does a fantastic job at portraying the ups and downs of his character, at times being the cool, calculating businessman, and other times, the furious husband. Actors Rob Reiner and Margot Robbie excel in their respective supporting roles as father and wife. Jonah Hill goes above and beyond his role perennially inebriated second in command, perfectly capturing the fast-lane Wall Street lifestyle, as well as the accent that dominates this movie.

Scene after scene of foolhardy behavior, luxury beach houses, and a drug called Quaalude can make the mind go as numb as the users on the screen, while still holding a kind of luster after two and a half hours of the same thing. At points, the famed movie director Martin Scorsese seems to glorify the reckless lifestyle of this young millionaire as it sympathizes his every action and is less concerned his criminal activity. Granted, the film is based off of an autobiography, but it takes a less regretful angle than expected.

Overall, this movie is the perfect cinematic portrayal of a rock and roll lifestyle, though perhaps not for the whole family, but certainly for those that fall within the demographic of party-loving movie-goers that rarely bat an eye at explicit content. An entertaining feature with a half-decent plot and a loveable cast, “The Wolf of Wall Street” proves to be very excellent.