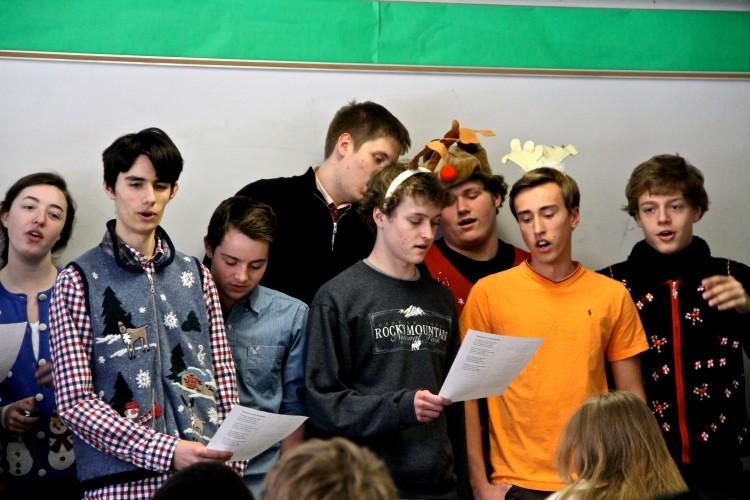 French IV students spent a week in class rehearsing for their performances during fifth period Friday.

The sweet sounds of high schoolers screaming French music could be heard multiple times during the day Friday as French Teacher Mr. Joe Moravec’s classes brought out the reindeer props for their annual Christmas caroling event to celebrate the Holiday season.

Students spent about a week practicing and preparing for the day, memorizing French versions of songs such as “Deck the Halls”, “Jingle Bells,” and “Rudolph the Red-Nosed Reindeer,” and a specifically French song called “Bonjour L’Hiver,” which translates to “Hello Winter.” Mr. Moravec is new to both BSM and the caroling tradition this year, only becoming aware when French I and II teacher Madame Amy Jo Hyde presented the custom to him. “I haven’t [caroled] in French before, so I was unfamiliar and a little nervous. But because we’ve sung the songs over and over in class i’ve become more comfortable,” Mr. Moravec said.

Though the caroling may be seen as a way for students to show off their talents, a majority of the French enthusiasts see the class period spent traveling class to class, singing whatever words they can as loud as they can as an opportunity to have some fun. “I think it’s just fun to go out there and make fools of ourselves,” junior and French student Anna LeJeune said.