Girls’ Basketball hoping for a return to state tournament 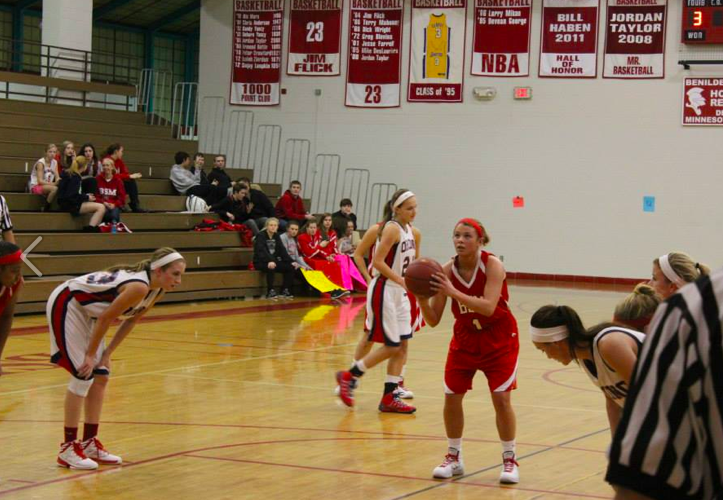 Girls Basketball: Senior Grace Coughlin has committed to play for the University of Minnesota yesterday.

After finishing last season with an outstanding record of 20 wins and 8 losses, the Benilde-St. Margaret’s girls’ basketball team is looking to once again competing for a conference championship and making a return to the state tournament, which they have not made since the 2010-2011 season.

“I think this team has so much potential, the only thing that can hold us back is ourselves. The basketball season is long so if we stay motivated and focused, but also have fun, you can expect big things from us,” Grace Coughlin said.

With a more experienced team than they have had in the past and veteran head coach Bob Lyons, there are high expectations for the season. “We are much more experienced, focused, and driven than last year. We have worked hard over the summer and this fall. We have goals and we expect to accomplish them; we will accept nothing less,” Grace Coughlin said.

The team has been working on implementing a new offensive system last year, which will be much easier for the players to run and hopefully lead to more points. “Our team has a lot of chemistry on and off the court. We have quick and athletic players as well as tall and physical players. We all complement each other’s style of play,” junior Allie Coughlin said.

The Red Knights have started the season with two close wins over Orono and Minneapolis Southwest and will host Maranatha Christian on Tuesday as they look to continue their undefeated start to the season.

“We have a ton of talent and should excel throughout the season as long as we stay focussed and play hard. I think that we are going to surprise people, and we have a great season to look forward to,” junior Gretchen Sattler said.