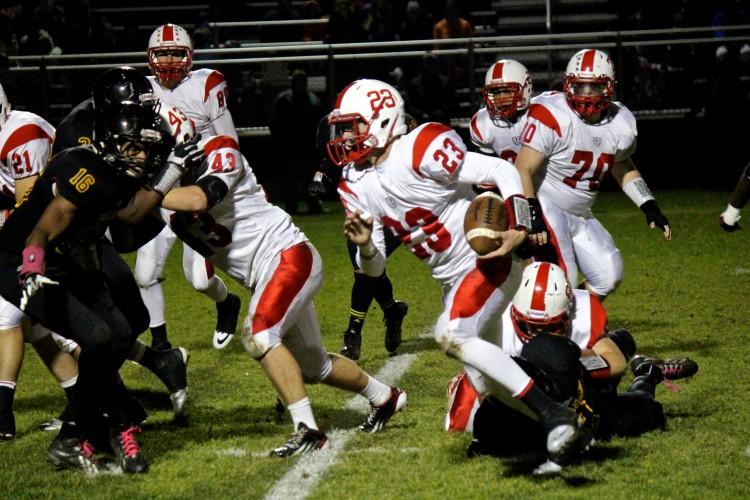 For the second straight year, the Benilde-St. Margaret’s football team was defeated by the DeLaSalle Islanders in the section playoffs, ending their season one game away from state.

DeLaSalle created a turnover on the first play of the game and turned it into a touchdown, but the Red Knights tied the game with a one-yard touchdown run by Callaghan Commers.

The two teams exchanged touchdowns in the second quarter and went into halftime tied at 14. DeLaSalle’s Chris Williams gave the Islanders the 21-14 lead with a 45-yard touchdown run, but Keaton Studsrud countered with a 67-yard scramble for the touchdown. The extra point was missed however, and DeLaSalle retained a 21-20 lead.

Both teams exchanged possessions in the fourth quarter and kicker Matt Arnason gave the Red Knights the 23-21 lead on a 33-yard field goal. BSM’s defense forced an Islander punt and were in great position to close the game until Studsrud was stripped of the ball by a DeLaSalle defender.

The Islanders drove down the field into Red Knight and on fourth-and-seven, quarterback Billy Hart eluded a Red Knight pass-rush and found Williams who weaved his way through the Red Knights’ defense and into the endzone to give the Islanders the 27-23 lead.

The Red Knights finished the season with a 7-3 record and the program’s first conference championship since 2004. They will graduate 22 seniors as the team moves into the Metro West conference for next season.