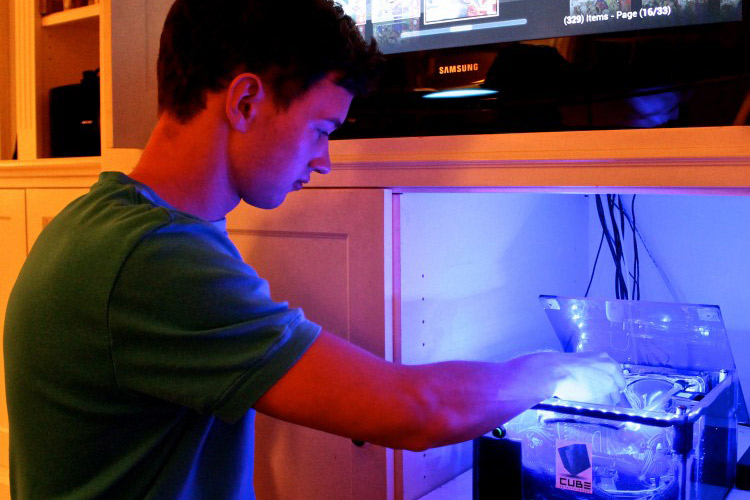 America’s next great software designer could be walking the halls of Benilde-St.Margarets. Despite attending BSM since freshman year, few students know of Ben Lenington’s technological talent and his latest product: the Cube.

Lenington began demonstrating his aptitude for technology in kindergarten by experimenting with his parent’s security alarm system, and by fifth grade, he had already constructed his first of five pinball machines. “Ever since I was really young, I had a strange interest in electronics and building things and stuff like that. One of my teachers suggested I get involved at the Bakken, so my parents signed me up for a couple of classes there. Before I knew it I was taking a lot of classes and building stuff,” Lenington said.

Over the past few years, Ben began to assemble a machine of unrivaled capability called “the Cube”. This feat in computer engineering combines all forms of entertainment such as games, music, movies, and TV shows into one console and interface that is easy to use. Ben has managed to streamline the complex software required to run all of these forms of media into one clean, user-friendly interface. “[The Cube] is built using modified computer parts. I didn’t put game systems together; its built using modified computer parts in a custom case,” Lenington said.

One of the most impressive hallmarks of the Cube is its ability to play everything from the the classic 1985 Super Mario Bros. to modern blockbusters like Bioshock: Infinite with just a few cursor clicks. “There are a lot of things on the market that do one thing really well, but there are very few products that can combine all of them. [The Cube] is capable of running almost any game from any console with a few exceptions,” Lenington said.

Despite the success of the Cube, Lenington is reluctant to sell his project or design a duplicate version. “I can’t take 100% of the credit for how it turned out because much of the actual interface is based off of open source software that I combined into one device. It was the work of a lot of people that I kind of combined into one thing. I’m not really ever considering marketing it,” Lenington said.

In addition to designing the Cube, Lenington strives to help the computer science community whenever he can. “I’m working summers at the Bakken as a summer camp counselor to help get kids interested in the same thing, and also last year I did volunteer work at Free Geek Minnesota, which repairs and builds computers for needy or underprivileged people and we donate free computers to people in need after we build them,” Lenington said.

His accomplishments in computer engineering have opened up many different options for his future career. Ben’s interests in software design and electrical engineering have helped to reveal potential majors for him in college. “I’m looking at going into Computer Science for college major, and it relates pretty closely to what I’m doing right now,” Lenington said.