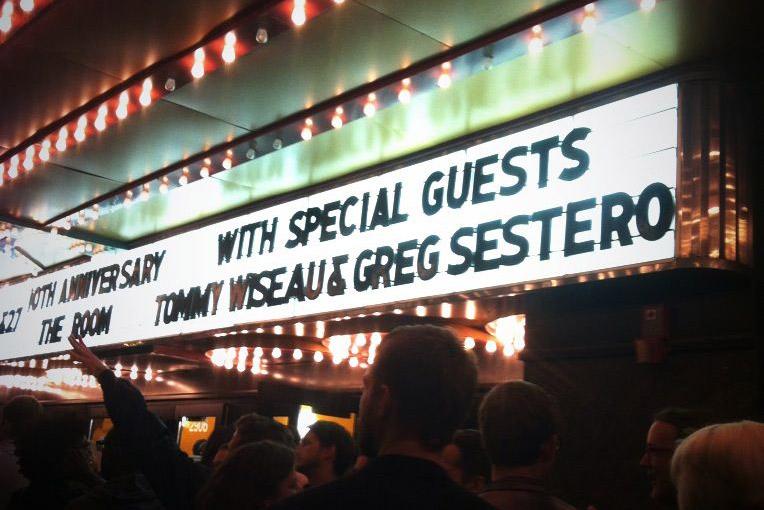 The Room celebrated ten years of showings at the Uptown Theatre this summer with appearances from the movie's stars.

Known as the longest running midnight movie of all time, The Rocky Horror Picture Show, is an excuse to toilet paper a movie theater, dress up, and shout obscenities at the movie screen. The cult classic plays the last Saturday of every month at the Uptown Theater, and is a perfect late night activity for movie lovers and party goers alike.

Since Rocky Horror’s release in 1975, this ironic musical/horror production has inspired audiences everywhere to sing along. The plot follows newly engaged Brad and Janet (portrayed by Barry Bostwick and Susan Sarandon) as they are stranded in the rain and seek refuge at the mansion of Frank N. Furter, portrayed by the deviant, yet fantastic, Tim Curry. After entering the doors of the castle, Brad and Janet witness many oddities, including the “birth” of Frank N. Furter’s perfect experiment, Rocky.

The rest of the film proceeds in an assortment of musical numbers, followed by character betrayals and plot twists. For those who wish to intently follow the twisted plot of Rocky Horror it’s recommended to watch the film at home, as the theater experience is about the exactly that: the experience. Lead by a live shadow cast, Transvestite Soup, the film is continuously interrupted by the shouts of cast members, the throwing of rice, and the singing (or rather shouting) of the audience.

In the scheme of things, the plot of the film doesn’t really matter, as a more interesting scenario plays out around the theater. Transvestite Soup members, dressed in full character, run throughout the theater, dancing, singing, and acting out their character. Not only that, but audience members participate in the activities by dressing as alluring maids and hunchbacked butlers; all in the hopes of being crowned the ‘best dressed’ at the beginning of the show.

Nothing is off limits at a Rocky Horror production. Singing, dancing, and shouting are all welcomed actions at a showing. For example, the entire theater dances along to Rocky Horror’s most widely known song, “The Time Warp,” a choreographed dance led on screen through a series of charts. Other commonalities at a Rocky Horror viewing include the throwing of toilet paper until every inch of the theater is covered in it.

The Rocky Horror Picture Show has attracted audiences to it’s midnight showings due to it’s rousing audiences, and interactive plot. By encouraging audiences to step out of their comfort zones, this midnight showing draws in first time viewers, as well as long time fans, creating a care free and vivacious atmosphere throughout the night. Looking for something fun to do before Halloween? The Rocky Horror Picture Show serves as a creative way to spend a Saturday night.

Known as quite possibly the best worst film of all time, The Room is a film that everyone must experience at least once in their lifetime. The Room is filled with mistakes and inconsistencies that can be spotted only minutes into the film. Despite these faults, audiences know that they’re in for a treat, a bitter and very hard to swallow treat.

Released in 2003 by its producer, director, writer, funder, and lead man, Tommy Wiseau, the movie focuses on a banker named Johnny (portrayed by Wiseau) and his fiance Lisa, who have been together for a number of years (the number varies throughout the film–an example of its discrepancies), who decides to cheat on Johnny with his best friend, Mark.

Although the plot may sound like any terribly cliched romantic drama, The Room never ceases to shock and amaze those in the audience. With mistakes as grievous as completely unresolved plot lines, from the dramatic reveal of Lisa’s mom having breast cancer that is never referenced again, to out of focus shots and nonsensical scripting, viewers have no choice but to embrace the flaws wholeheartedly.

The pure awfulness of every aspect of the movie isn’t the only feature that keeps fans coming back time and time again. For a midnight movie this horrible, crowd rituals are a must. And they are interesting. Traditions include yelling “Focus!” every time the shot goes blurry and running up to the screen, jumping around to “get Johnny’s attention”, and finally waving and cheering when he finally looks down at the corner of the screen and laughs inexplicably.

Perhaps the most widely known custom of The Room watchers is the throwing of spoons. Throughout the movie, sitting on a side table in the on screen titular room, are framed pictures of cutlery, one of which is a spoon. Although these strange decorations fit in well with the rest of the bizarre set, audiences couldn’t quite let a framed picture of a spoon slide past unnoticed. Every time the spoon appears on screen, spoons are thrown into the air and rain down onto the floor of the theater.

The popularity of The Room has spread to global audiences. After showing for the first time at small theaters in Los Angeles, the movie caught on within the younger college crowd and word spread of its amazing dreadfulness across America. Now it plays in countries such as Denmark, India, and Germany. On a local level, “The Room” plays one Friday a month at the Uptown Theatre at midnight, horrible enough for everyone to enjoy.